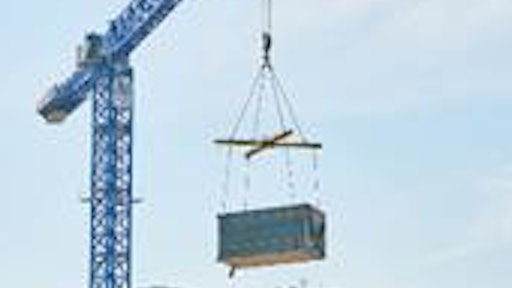 The crane, model 21LC750, located at the shopping centre’s rooftop, is building a hotel with modules of more than 7.5 tonnes in weight.
BKL

One of Germany's most powerful hire cranes, a Linden Comansa 21LC750 from BKL Baukran Logistik's crane fleet, now stands on the parking deck of Berlin's mall Ring-Center. This 750 tonne metre giant, with maximum load capacity of 53 tons, will be installing 151 wood modules of almost 9 tons in weight each, building an exceptional hotel with a modular design concept.

"A special feature of the SKYPARK hotel concept by MQ Real Estate is that it exploits the inner-city potential of adding another storey", says Reiner Dinse from the Hannover office of BKL Baukran Logistik GmbH. He goes on, "The hotel's modular design requires large wood modules, each 20 square meters and weighing some 8 tons, to be lifted over a distance of up to 246 feet. Not many cranes can handle such a Herculean task".

Given the challenging requirements of load capacity and radius, the team picked from BKL's fleet a 21LC750 flat-top, one of Germany's most powerful hire cranes. Thanks to its 262-foot-long jib and the PowerLift system, this model is perfect to lift the approximately 8 ton modules from the street, around 66 feet below the site of the crane, to their destination on the aboveground park deck, almost 262 feet away.

As the bearing capacity of the car park roof is insufficient for such an exceptional load, the building contractor MQ Real Estate teamed up with the crane specialists at BKL Hannover and a steel constructor to design a special 54- by 54-foot steel substructure to transfer the load, assembling the crane on its 33-foot folding cross base.

The BKL specialists settled on a 551-ton machine from their fleet of mobile cranes to assemble the Comansa tower crane and lift its approximately 26-ton cross base. The Ring-Center's central location on Frankfurter Avenue, one of Berlin’s main arterial roads, called for a tight schedule, not just to assemble the 21LC750 crane, but also to set up and dismantle the mobile crane. The BKL project team planned a synchronized plan of transport and delivery of the crane parts to the site to install the steel substructure and the construction crane in just five days.

The 21 LC 750 is to lift the 151 room modules, which are fully equipped apart from the moveable furniture, by August 2018. With 151 rooms in all, the SKYPARK Berlin hotel overlooks the Berlin-Mitte district, which holds the city’s Historic centre. 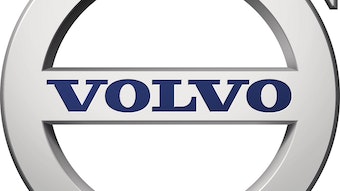