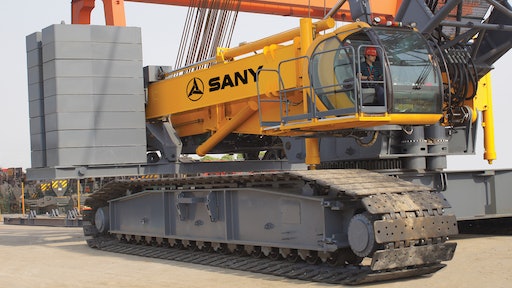 Sany America introduced the SCC8500 in 2012, a 550-ton crawler crane with an automatic counterbalance system found to infringe on patents held by Manitowoc.

The investigation is based on a June 12, 2013 Complaint filed by Manitowoc alleging violation of Section 337 of the Tariff Act by Respondents Sany Heavy Industry and Sany America Inc. in the importation into the U.S. and sale of certain crawler cranes and components that infringe one or more claims of U.S. Patent Nos. 7,546,928 (the ‘928 patent) and 7,967,158 (the ‘158 patent), and that were designed and manufactured using Manitowoc’s misappropriated trade secrets.

The complaint specifically refers to the Sany SCC8500 Crane and components thereof as infringing products. In particular, the ‘928 and ‘158 patents relate to mobile crawler cranes and methods of operating them with a movable counterweight. The ‘928 invention employs a movable counterweight unit and the ‘158 invention includes a linear actuation device (e.g., a hydraulic cylinder or a rack and pinion assembly) for causing the counterweight to move. The trade secrets at issue cover Manitowoc Cranes’ transformable variable position counterweight technology, which allows a crane to be set up in different configurations for different purposes.

Manitowoc is pleased by the Judge’s favorable ruling and looks forward to receiving the Commission’s final order later this year. The notice issued by the Judge released only limited information. The company will provide additional information once the public version of the Final Initial Determination is issued.