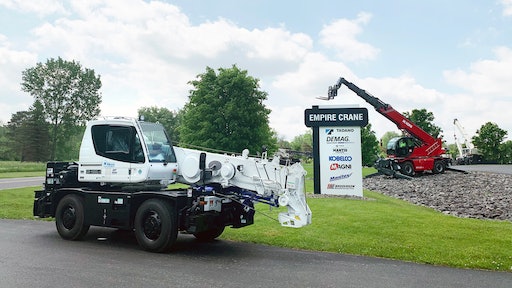 Tadano America Corporation announced that Empire Crane Company, headquartered in Syracuse, New York, has been added as an authorized distributor for Tadano cranes in the northeastern United States. Since opening in 2002, Empire Crane has been a trusted partner in the lifting industry and is a long-time authorized distributor of Demag and Mantis cranes.

“For years and years we’ve been involved with the Tadano corporation through the Tadano Mantis Tele-crawlers. As we start off 2021, it’s a privilege to now be able to sell the whole product line in our territory,” said Empire Crane Company CEO and Vice President Luke Lonergan. “When I pull into work each morning and see the Tadano logo at the top of our company sign, it makes me so proud that we represent the leading crane manufacturer for the northeast part of the United States.”

Check out the Profit Matters channel. There is how-to information, articles and more to squeeze the most profit from your projects and improve your bottom line.
March 1, 2021
Latest

Bay Ltd. increased its crane fleet with 15 all-terrain Liebherr cranes, ranging from a 60- to 600-ton capacity, based on the reliability and life span of Liebherr's equipment and their quality customer service.
Liebherr USA, Co.
December 22, 2020
Follow Us