Hyundai VIP Tour: 4 Fact- and Fun-filled Days Through the Heart of South Korea 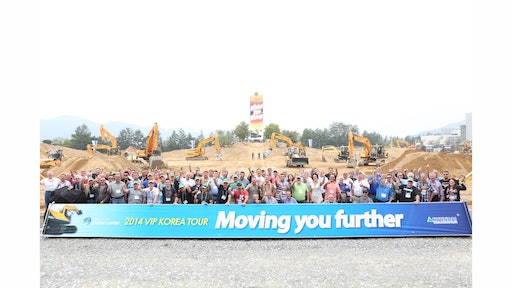 One of the perks of being a journalist in the construction industry is the occasional opportunity to visit manufacturers’ overseas construction equipment operations. Last week, I was among a select group of editors to be invited to join Hyundai’s VIP Tour to South Korea for North American dealers and customers. The tour consisted of a heavy dose of plant visits mingled with a few tastes of traditional Korean culture along the way.

After flying into the far southern city of Busan (also known as Pusan), the first official day of our trip included a tour of the company’s massive shipbuilding operations, which gave Hyundai Heavy Industries Co. Ltd. (HHI) its start back in 1972. Today, Hyundai builds 15% of the world’s ships at the port facilities in Ulsan, including tankers, containerships, various types of carriers and other specialized marine transport. This tour consisted of a bus ride through the shipbuilding yard past ships in various stages of construction in drydocks (they’re built from the bottom up), as well as a walking tour of the marine engine facility, where we witnessed the assembly of engines towering as much as two or three stories tall.

Next on the agenda was a tour of the construction equipment fabrication and assembly facilities, which are co-located on the same site as the shipbuilding operations. The Construction Equipment Division was launched in 1985 and currently builds 1.5- to 150-ton excavators, 125- to 348-hp wheel loaders and 1- to 25-ton forklifts at the Ulsan site. The division also produces backhoe-loader and compactor models for Tier 3 regions; this spring, it announced plans to introduce these models to North America starting in 2015.

In addition to walking tours through the division’s fabrication and assembly operations, attendees of the VIP Tour were treated to a sneak peak – and a chance to vote on – a proposed updated color scheme for Hyundai excavators. We were also give a first look at the R125 excavator, scheduled to be available to dealers and customers this fall.

We returned to Gyeongju to visit the Bulkuk Temple (a historic Buddhist temple) before heading to our hotel to prepare for the Welcome Dinner. The evening was packed with a welcome presentation by Mr. Koo, dealer awards and customer recognitions, as well as entertainment consisting of the Robex Band, a talented group of Hyundai employees who played a rousing rendition of The Eagles’ "Hotel California"; a youth choir in traditional Korean attire made up of children of Hyundai employees; and a reknowned group of Korean tenors who sang musical selections ranging from Celine Dion to Les Miserables.

After a very full first day, the next day was much quieter as we traveled to the Hyundai Cummins Engine Co. (HCEC) joint-venture facility located in the industrial city of Daegu. The state-of-the-art facility, which began production in May, was built to facilitate the 50/50 joint venture partnership between Hyundai and Cummins for the manufacture of engines for use in Hyundai construction and industrial equipment. It has the capacity to ramp up production to over 50,000 mid-range engines per year spanning a power range from 133 to 365 hp. The engines include a mechanically controlled 5.9-liter and 8.3-liter series and an electronically controlled 6.7-liter and 8.9-liter series.

Following the walking tour of this pristine facility, it was back on the bus for the drive to Yongin for a quick tour of a Korean Folk Village before starting the long ride north to the capital of Seoul. (Interesting fact: Seoul is home to 10 million permanent citizens, but according to our guide an additional 5 million commute into the city on a daily basis.) Once we arrived, we enjoyed a true taste of Korea at the JinJinBara restaurant before settling in for the evening.

Day three found us on the bus early the next day headed for the Eum-sung factory for an elaborate equipment demonstration, followed by a chance to climb aboard and operate the machines. This in turn was followed by a walking tour of the Construction Equipment Division’s extensive parts and training center before returning to Seoul for a hike up the mountainside (okay, so we rode the bus most of the way) to Seoul Tower for stunning views of the city before sitting down to an authentic Korean barbeque for dinner.

Day four allowed us to catch our breaths with a late start before hitting the popular Seoul street markets for some quick shopping, followed by a visit to a local Korean theatre to view “Baebijangjun”, a beautiful traditional performance that combined comedy, acrobatics and ballet. The final stop on the VIP Tour was to the Farewell Dinner held at the Seoul Marina, located on the Han River that divides the “old” and “new” sections of the city. This informal event gave us the chance to enjoy highlights from our journey, share in a competition of vocal and, for some, dance skills (or lack thereof) in true Korean fashion and even experience the eye-popping K-Pop (Korean pop music) culture first hand. It was the perfect venue to enjoy a few laughs and fellowship prior to heading home.

Many thanks to our hosts at HHI and Hyundai Construction Equipment for the opportunity to participate in this whirlwind yet highly informative Asian adventure!

Hyundai Construction Focuses its Sights on the North American Market

Check out the Profit Matters channel. There is how-to information, articles and more to squeeze the most profit from your projects and improve your bottom line.
May 1, 2021
Follow Us