Hyundai Construction Focuses its Sights on the North American Market 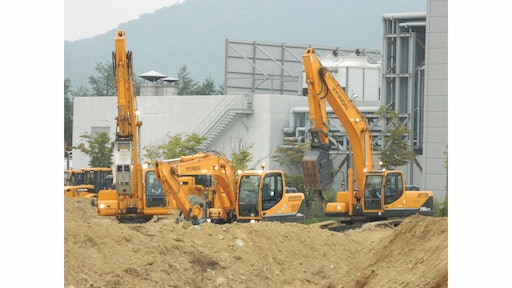 At CONEXPO-CON/AGG 2014 in March, Hyundai announced plans to launch the H930C backhoe-loader in North America by the end of 2015. Now, it appears this announcement may have been premature.

“We are now developing a backhoe-loader for the European and North America markets with a Tier 4 engine. Developments are ongoing,” said Mr. Koo. “The barrier to the markets is the cost. Currently, the production for it is too [low] so the cost is higher.”

“We just started our backhoe-loader business two years ago. That means, we can’t meet sufficient production requirements,” Mr. Lee explained. “So we are dispatching backhoe-loaders to the Russian and North African markets first. But in the case of the Western countries, it will require some more time because they [must meet] the emissions regulations.”

At this point, Hyundai plans to launch a Tier 3 backhoe-loader model to the Turkish market sometime in 2015. However, a North American launch will likely be delayed as the company’s R&D team works to ensure both regulatory compliance and a competitive price point. As such, a 2016 launch is more likely.

Because of its growing role, compact excavators have become increasingly important to the company. It first introduced its mini-excavator line roughly seven years ago. “That means now is the time to launch new models,” said Mr. Lee. Additional new models are currently in development.

During CONEXPO-CON/AGG, Hyundai also announced plans to bring vibratory rollers to North America. According to Gillette, the rollers are currently awaiting a Cummins Tier 4 Final engine solution prior to sale in the U.S. However, he hinted in a separate conversation that there is a chance they may come to market sooner equipped with existing Deutz Tier 3 engine technology if product and market demand dictate it.

Hybrid Technology in the Works

The HI-POSS (Hyundai Intelligent Power Optimal Sharing & Energy Saving) electro-hydraulic system, featured at CONEXPO-CON/AGG, represents the company’s initial foray into a more ecofriendly excavator design. The system reuses energy from the accumulator to achieve a fuel savings of 20% or greater.

Hyundai is also developing a hybrid system that uses energy recovery to generate a total fuel efficiency of around 30%. “In the case of the hybrid excavators, we already developed that type of machine (a 22-ton model) and have tested it in the domestic market for about a year,” said Mr. Lee.

While the technology has proven viable, the biggest barrier to implementation is cost. “With the development of this hybrid machine, the main problem is around a 60% cost increase,” said Mr. Koo. “Such a high cost increase is not accepted in the market. So we are developing cost reductions. With the development of a second hybrid machine, the cost is around 35%. But this is still not acceptable in the market. Now we are working to further reduce the cost to around 20%.”

Given the substantial fuel savings, a 20% increase should prove more palatable to prospective customers. “We need to achieve this cost reduction to achieve commercial success,” said Mr. Koo.

A Shift in Direction to the West

Hyundai first introduced construction equipment to North America 25 years ago. At that time, said Mr. Yoon, the company tried to sell on price because of its lack of brand recognition. “Now, what we’re trying to do is focus on the value of our machines and how we support our customers,” he noted.

The company was able to capitalize on the economic downturn as contractors turned to rental as an alternative to purchase. “The hardest thing with an emerging brand is getting [customers] to try it the first time,” Goettel commented. “We’ve had a great deal of luck in that the downturn may have helped us. More people were renting instead of buying and we had a number of dealers [that] attacked their market with large rental fleets… It may not be a sale that day, but when the time comes to buy, [customers] say that was just as good [as the machine I owned] and it’s a better value. That’s been a key component of how we go to market.”

Gillette agrees, adding that more and more customers who in the past would never have considered a Hyundai machine are realizing that the equipment is as good as and probably better than other brands in a lot of situations. “Suddenly, they’re much more open to trying a Hyundai machine,” he said.

This is translating into growing market share. According to Mr. Lee, it has grown steadily since 2010. This can be largely attributed to a more direct focus on North American growth.

“During the last 30 years, our company’s strategy was first to focus on the developing countries,” said Mr. Lee. Today, of the 176 countries outside of Europe and North America, he said Hyundai claims a No. 1 market share in around 90.

“Our market share in the developing countries is sufficient. In the case of the excavator, in all of the emerging markets, our market share is around 13.8%. Now is the time to look at the Western countries,” Mr. Lee indicated.

Now, a concerted focus is being placed on further expansion of market share in North America. A large part of that will involve dealer development and product support.

According to Gillette, Hyundai’s North American dealer development strategy includes plans to increase the number of dealers plus add dealers that are strong enough to maintain multiple locations. The goal is to reach 80% market coverage by the end of 2014.

“If you look at coverage from a market standpoint, we’re probably at 60% to 65% coverage,” he noted. “There are some [areas where gaps are] obvious because we have no representation at all. We have some other significant markets where we don’t feel our representation is doing a satisfactory job of representing us. That could be because they’re focused on some other products, like paving equipment, or it could be because they have competitive lines in house and we haven’t been able to get their attention focused on Hyundai. But we’re attacking all of those one by one by one and making the decisions we need to make to move forward.”

Single-line dealers will be set up where it makes sense, though Gillette acknowledged, “There are a lot of locations in the western U.S. and Western Canada where it’s difficult to set up a dealer there and have him survive just on Hyundai products. Smaller locations that are parts and service and some sales in some areas make sense.”

Multi-line dealers will also continue to be a part of the strategy. “What we have to do with dealers with multiple lines is prove to them that our product is as good or better than the other brands. We have to be able to be a better partner and respond quicker than the other brands,” Gillette said. “Most of them, if they look at the profitability of what they’re selling, they’ll realize they’re making more money on ours than they are with the others in most cases.”

Support services will be a large part of that package. “We are making a very concerted effort to improve our dealer support,” Gillette stated. “We want to be able to say that our product is just as good as anyone else’s in the market and the support package with it – parts and service – is equal to if not better than anyone else.”

In roughly a year’s time, Hyundai added nearly 6,000 line items to its parts sales. “Right now, our CE dealers are getting between a 98.2% to 98.4% fill rate on parts, which is exceptional,” Gillette noted. “The forklift is a little less – they’re maybe 97.5%, but they’ve come up almost 20 points in the last year. So parts fill is a big item of change.”

The company has also implemented additional service training at the dealer level. “We used to have technical service reps that did a lot of wrench turning and physically went out to help the dealer fix products. With the number of dealers we have in the field, we’re really trying to change that mentally,” said Gillette. “We’re focusing more on training for our people as well as the dealers to make our technical service reps more of a consultative group so that 70% of the problems that the dealer has can be solved with a simple phone call or using a diagnostic tool.

“We’re trying to make the dealers more self-supporting,” he added, “stand on their own two feet and represent the product better than they have in the past.”

Hyundai VIP Tour: 4 Fact- and Fun-filled Days Through the Heart of South Korea