Another Mini-Success Story in the Making 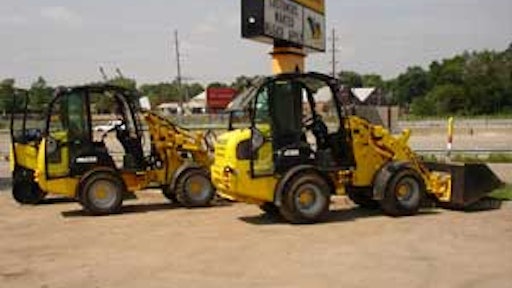 Turn back the clock 15 years, or perhaps just 10, and remember what equipment-using contractors were saying about the mini hydraulic excavator. "What am I supposed to do with this - it doesn't look capable of any real work?" Or, "This is a toy, right?"

What a difference a decade or so makes. Today we can't imagine the equipment industry without the mini excavator, which has gained the respect of equipment users for its ability to take on all sorts tough jobs in confined spaces-or on virtually any jobsite for that matter, confined or not.

"The first mini excavators we had were given to us on a nine-month trial by a manufacturer we represented back then," says Robert Sloan, owner of CE Rentals in Elmhurst, Ill. "Our customers had no interest in them at all, and we actually ended up returning the machines to the manufacturer. I think the manufacturer gave them to us, because they weren't sure what to do with them either."

Today, however, CE Rentals owns more than a dozen mini excavators, which are among the company's top rental machines, says Sloan, "right up there with the skid steer loader." In Sloan's opinion, the gradual acceptance of the mini was in some measure the result of technical improvement, such as switching from steel to rubber tracks, but was primarily a matter of the industry realizing the capability of these machines.

"I proved to myself just how much work the mini could do," says Sloan, "when I used one to dig the foundation for our present building. But convincing our customers to try the machine on their jobsites was a slow process."

Adding these machines to the fleet was one of those fundamental business decisions, says Sloan, a decision based primarily on assessing customer needs (mostly by listening to their comments), and recognizing that the capability of the skid steer loader sometimes falls short of meeting customer requirements.

"For instance," says Sloan, "we found that even some of the largest skid steers have a tough time picking up a pallet of brick or a pallet of sod off the back of a truck-a routine application. To make the skid steer work in these situations, you sometimes have to remove a couple rows of brick or a few rolls of sod. That's extra time and labor. And once you take the wrapping and banding off a pallet of bricks, chances are you're going to spill some when moving them with a skid steer and possibly cause damage."

Adding the new articulated wheel loaders to the CE Rentals fleet, however, also required a fair amount of faith-faith, says Sloan, that customers would recognize the wheel loader's capabilities. And a few have.

"We have a customer who leases a number of skid steer loaders every winter to load salt trucks and to push 10-foot snow boxes," he says. "At the beginning of this past winter, we asked if he'd consider replacing just one of the skid steers with our WL 30. He agreed, but reluctantly."

Sloan explains that the customer buys calcium-chloride pellets in heavy, 4-foot-square sacks that are designed to be lifted over the side of the truck and then opened with a zip cord at the bottom. Only problem was, says Sloan, the customer's skid steers struggled with the sacks.

"For our customer base, the compact wheel loader is a new product-they just aren't familiar with it," he says. "We're finding that we have to educate the customer about the machine's capabilities and features-explain that its ability to lift more and higher can make them more efficient in many of their applications, and that articulated steering is an advantage in certain situations. The skid steer will always have its place, but we want customers to realize that the wheel loader is sometimes a better alternative."

But it's a tough nut to crack, says Sloan. Part of CE Rentals' approach to educate potential users is offering to also deliver a wheel loader when selected customers rent a large skid steer. The company is hopeful that this two-for-one approach will allow customers to ease into the use of the wheel loader and discover its capabilities.

"We tell them that we know they want the skid steer to get their job done," says Sloan, "but ask that they try the wheel loader. We're finding that some of the resistance to these machines is coming from the guy in the office or the yard supervisor, who thinks their workers won't be comfortable or safe with the machine. We've even had some tell us that the machine looks top-heavy. It's not, of course, but these are some of the perceptions you encounter from people unfamiliar with the product."

So, has CE Rentals placed itself out on a limb with its compact wheel loaders?

"We might be ahead of the curve here with the compact wheel loader," says Sloan," but I think we're right. A lot of manufactures seem to be betting that the product is going to catch on. If the compact-wheel-loader business develops anything like the mini excavator business, and I think it might, then it will be phenomenal. I think we're getting in on the ground floor of something good."

Economics and advantages
Although CE Rentals charges more for the rental of the Wacker Neuson compact wheel loaders than for skid steer loaders, the machines' low utilization at present, says Sloan, makes the higher rate insignificant in terms of profitability. But he's optimistic. Increased utilization will begin to drive profit, he says.

Taking the long view, Sloan is of the opinion that compact wheel loaders in the rental fleet might provide a better return on investment than skid steer loaders. The company's goal is to replace the fleet every 18 months, but obviously, he says, that goal is influence by sales. ("If we're selling it, then we're replacing it.") But in an economy that is depressing sales, machines might remain in the fleet longer than anticipated, he says, and in that situation, the lower incidence of repair for the compact wheel loader, and its longer service life, versus the skid steer loader, might enhance the overall profitability of the wheel loader.

The same reasoning, he says, might apply to customers who buy the compact wheel loader.

"The skid steer likely will generate a higher return on investment initially," he says, "until you get two years or four years out and start throwing thousands into the machine for parts and repairs. There are fewer wear items on the compact wheel loader, like tires, and I think its smoother operation, compared to the skid steer, should be easier on the machine."

Sloan sees the prospect of selling compact wheel loaders increasing, generally, as rental units acquire hours, allowing dealers to give customers a price break. And if a lower price is attractive to a potential buyer, or at least gives the buyer pause before investing automatically in another large skid steer, what advice would Sloan offer to guide the decision?

If the potential buyer needs a machine to be used primarily in confined spaces, then the skid steer might be the better choice, he says, as it might be if the customer can't transport a larger wheel loader with present hauling equipment.

"But transporting the compact wheel loader is probably less a problem than some think," he says. "We've found that our machines can be easily hauled on a standard 10,000-pound trailer. The WL 30 weighs less than 7,000 pounds, and our largest skid steers are at around 7,700 pounds."

Also on the compact wheel loader's list of potential advantages, says Sloan, is its ability lift more weight, and perhaps, to lift higher. And usually, he says, you can load faster with the machine, compared to the skid steer, because it typically carries larger loads and travels faster.

"The wheel loader drives like a vehicle, which makes the machine easier to use for operators of varied skill levels," he says. "And usually the machine causes less ground damage than a skid steer-it's going to leave marks on the turf, but it's not going to rip up the sod and pile it up like a skid steer."

And what does Sloan consider to be the overall prospects for compact wheel loaders?