Albanese D&S works its LiuGong excavators and loaders through the night on this stormwater and sewer pipeline replacement project. 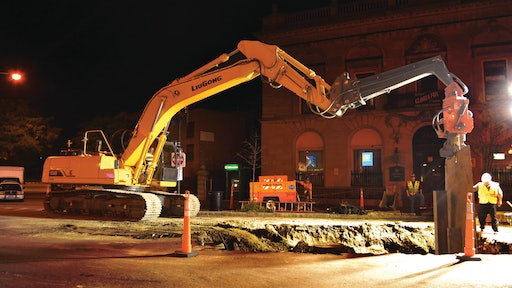 A LiuGong 936D excavator drives an I-beam into the ground to install trench box walls prior to pipeline replacement.

Currently, a single underground pipeline carries both stormwater and sewage to Boston’s water treatment plant. With the growth of the city over time, this has resulted in flooding of the plant during severe storms. In order to correct the problem, the Boston Water and Sewage Commission (BWSC) needed to come up with a plan to divert stormwater away from the plant, since it wasn’t necessary to treat it.

The BWSC developed a strategic construction plan to completely separate the stormwater from the sewer line. The 2-year-long project would replace the combined pipeline with two separate pipes -- one to carry stormwater directly to the bay, the other to carry sewage to the treatment plant.

The $15 million bid was awarded to Albanese D&S, Inc. of Dracut, MA. “We did a similar job in Hartford not too long ago,” says Giovanni Albanese, owner. “We understood the scope of the work well, and what would be required to complete the job on time and on budget.”

Albanese D&S specializes in water, sewer, pipeline, communication and power line construction for publically bid projects in the states of Massachusetts, Connecticut, New Hampshire, Rhode Island and Vermont. Established in 1991, it is a family owned and operated business.

Work on the project is being conducted at night between the hours of 7 p.m. and 5 a.m. to minimize disruption in terms of foot and commuter traffic and delivery of water utility services to residents. Giovanni Albanese and his crew began by exposing the current pipe one block at a time.

To expose the pipe, they have to carefully penetrate and dig through the asphalt pavement, then scrape and remove the soil between the pavement and pipe. “One of the biggest challenges on this job is to avoid hitting underground utility lines while digging to access and remove the existing pipe. It’s a slow but steady process,” says Albanese.

Temporary trench boxes are being installed prior to laying the new pipe. To install the I-beams that support the trench box walls -- some up to 82 ft. below road level -- Albanese equipped the 936D with a Daedong Engineering pile driver attachment.

After the I-beams are installed, a 35,000-lb. LiuGong 842 Z-bar wheel loader equipped with a coupler and forks transports the steel side panels from the nearby equipment and material staging area to complete the trench box installation. Once the trench is safely secured, crew members begin removing the existing pipe and prepping the trench for the two new sewer and storm water pipelines.

Once the new pipes are in place, stockpiled materials removed during exposure of the old pipe are re-loaded into dump trucks using the 842 loader equipped with a 3.0-cu.-yd. bucket. It is then transported to the trench being completed to cover the new pipe and bring the base back up to street level for paving.

“As you can imagine, working in and around the city can be fairly complex,” says Albanese. “We are working under stringent time frames and can’t afford to get behind schedule. The demands of this job, really any job nowadays, necessitate reliable equipment that can withstand the rigors of 10 hours days, while providing quick cycle times and versatility.

"All of the LiuGong equipment on this job has performed impeccably from day one," he continues. "We’ve had no downtime outside of scheduled maintenance intervals and have used both of the excavators and a number of LiuGong wheel loaders with various attachments to accomplish a variety of work onsite.”

Avoid bottlenecks on your site by reducing passes to speed up cycle times with the perfect pair from Volvo.
October 1, 2020
Latest

75-hp model weighs up to 19,841 lbs., provides optimal stability and is lower to the ground for easy access
Mecalac North America
May 18, 2020

This 17 class machine extends the company's battery/electric line, joining the popular 9VXB which is already on the market
KATO-CES
April 24, 2020