Material handler clears the muck and cuts clean-up costs during construction of a Seattle subway line. 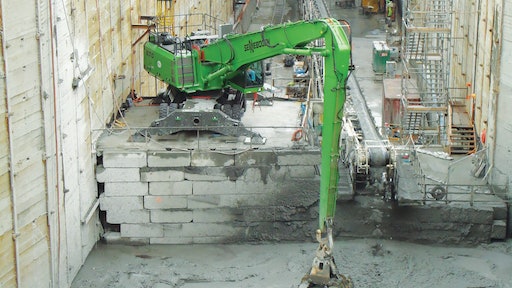 The operator of the SENNEBOGEN 870 M scoops up tailings with a custom clamshell bucket.

Sound Transit, Seattle, WA, is extending the U-Link subway from its LRT station at Pine Street to a new station planned at Capitol Hill. Michael Diponio, the vice president of Michigan-based Jay Dee Contractors, is project manager for the Jay Dee/Coluccio/Michels joint venture, which will mine the two tunnels, each 21 ft. in diameter and 3,800 ft. long.

Tunneling like this is Jay Dee’s stock-in-trade, and the family-owned business has been doing it for more than 45 years. With the U-Link project, however, Diponio faced unique challenges posed by the environmental standards of Washington State and the City of Seattle.

The problem, in a word, is muck. Conveyors from the project’s two tunnel boring machines deliver their tailings in the form of a heavy slurry to the open cut for the future subway station. The slurry arrives about 80 ft. below grade, and Diponio has to move the wet muck up to road level and haul it out to his fill site without compromising the city’s strict standards for protecting its water table and roadways.

“We’re working in a very urban area here, and our haul route travels directly through a residential area,” Diponio explains. “The track-out is severely limited, and using thousands of gallons of wash water every day is counter-productive.”

The contract includes significant cash incentives for complying with these requirements, and a local environmental technician is stationed on the site to monitor the operation. Officials for the city and consultants also conduct a walking tour of the project every week.

The simplest approach to moving the muck was to use stacking conveyors to transfer it up to a muck bin or to waiting dump trucks. However, the conveyor process resulted in the muck splashing too much for crews to clean up.

“The drop from the end of the conveyor into the dump was about 6 or 7 ft.,” Diponio notes. “The muck was splattering everywhere, 30 or 40 ft. It was going right up our sound wall! We had a ‘splooge patrol’ of five guys with loaders going full time to clean up.”

The muck wouldn’t splatter so much if it was drier, of course, but it then becomes too sticky to offload easily from the buckets and dumps. Foaming agents are actually added by the tunnel boring machine to condition the muck so that it flows freely from the excavation chamber.

“What we needed was a method to place, not drop, the material precisely into the dump trucks. We looked at some other machines, but we needed more horsepower and more mass to get the stability for a precise transfer,” says Diponio. “We went with the SENNEBOGEN 870 M on the recommendation of Modern Machinery. But really, we had no idea if it was going to work.”

The 870 M is a purpose-built material handler weighing 165,000 lbs. and powered by a 426-hp engine. The wheeled unit is mounted on a specially reinforced platform raising it 30 ft. above the floor of the excavation where the muck flows in. Modern Machinery fitted the machine with a SENNEBOGEN extra-long boom to make the 63-ft. reach up to the waiting trucks. Its 2.5-yd. clamshell bucket was also custom built with tight bucket closing tolerances to prevent leakage and spilling as the clamshell bucket swings over the truck bed.

The material handler is positioned down in the hole, 40 ft. beneath the ground surface. Once the bucket is raised above the surface and the machine swings over the edge of the shaft, the operator loses sight of the bucket. Jay Dee’s operators scoop up the muck and guide it up to the road level using two cameras to find their way. One camera is mounted at the boom knuckle and another is positioned roadside by the trucks’ station.

With a total boom length of 63 ft., there is only 3 in. of clearance to reach the dump bodies and pup trailers. The bucket is carefully lowered directly into the bed, with only inches of clearance on either side of the bucket, before the bucket is opened to let the muck flow out.

The fleet of dump trains grew as operators became increasingly proficient with the 870 M, and the drivers were able to navigate into the exact position with the help of markings painted on the pavement.

Picking up the pace

Loading each truck requires four passes to fill the front unit and five to fill the trailer. “This method has performed well beyond our expectations,” Diponio comments. “We now have 11 trucks moving through the cycle, and the SENNEBOGEN more than keeps up with them.”

He reports that the initial loading times exceeded his target, but the operators advanced up the learning curve very quickly. “Before we started, we spent a day or so with the operators, going over the drawings to make sure everyone understood the concept. The first tests came in at 20 minutes for a full load, and we were looking for 12 minutes,” he recalls. “The average now is under 10 minutes, which means we can now meet our production projections.” The best loading time achieved by any operator so far is just 6 minutes.

The fast loading cycles ensure that the haul trucks can keep pace with the tunnel boring machine, which is on track to arrive at Pine Street by the end of this year.

The speed and precision of the 870 M has also significantly reduced the cost of site maintenance, while protecting the quality of ground water. Jay Dee’s “splooge patrol” has been replaced by a crew of two who police the site once a day with a wheelbarrow. A wheel washer system and street sweeper take care of any spillage coming from the trucks’ tailgates.

As a result, the contractors are looking forward to earning their bonus for environmental compliance. Even at its fastest loading times, the material handler is moving with enough precision that the worksite stays meticulously clean. “The inspectors can tour the site in their street shoes without a problem,” Diponio asserts.

Rain or shine, your work must get done. Our ADTs are designed to keep you on solid ground. Demo a machine today!
October 9, 2020
Excavators

Automatic excavation keeps the operator on grade even when working on complex jobs, while saving time and reducing costs.
Topcon Positioning Systems
August 14, 2020
Follow Us