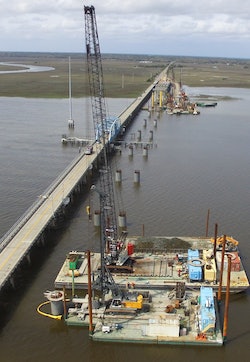 In Beaufort County, the South Carolina Department of Transportation is constructing the new Harbor River Bridge, a 3,353-ft.-long high-level, fixed-span bridge, to replace the existing swing-span bridge along Sea Island Parkway over the river. The new bridge will be 65 ft. high with 12 ft. wide lanes and 10-ft. shoulders in each direction. It is slated for completion in the summer of 2021.

The existing US 21 bridge is nearly 80 years old and is slated for demolition when the new bridge is finished. It is the only means for vehicular access from the mainland to Harbor Island, Hunting Island and Fripp Island.

South Carolina-based Lee & Sims Drilling Services, Inc. was brought on to complete the project. Originally founded in 1985 to provide water well drilling services, the company turned its focus primarily to deep foundation work in the early 2000s and that remains its specialty today.

Lee & Sims chose a Liebherr LB 36-410 drill rig to build 18 drilled shafts over nine interior bents for the new Harbor River Bridge. The rig was used to drill 8-ft.-diameter shafts to depths up to 115 ft. through sandy clay, marlstone and limestone.

“This project was on the larger side for us,” says John Sims, Lee & Sims vice president. “But thanks to the Liebherr rig’s reliability, we completed the project with zero downtime.”

Lee & Sims chose the LB 36-410 because of its capability to drill the depth and diameter necessary for the bridge project. However, the machine’s footprint and weight also made it suitable for working on a barge.

The LB-36-410 can perform multiple types of work, such as kelly drilling, continuous flight auger drilling, full displacement drilling, double rotary drilling and single paddle soil mixing. Its uppercarriage is compact and designed for small working radii. This allows for working at jobsites with limited space. When producing piles with very large diameters, up to 12 ft., the rig can be equipped with an additional equipment package, which includes an extended drilling axle, more counterweight and a shorter leader foot.

Two of Lee & Sims’ deep foundation rigs are manufactured by Liebherr. “We also have an LB 24-270, which has been a good rig,” Sims says.

Both machines are equipped with Kelly Visualization. The real-time display of the locking recesses of the Kelly bar on the cabin monitor continuously informs the operator of the actual distance to the next locking recess. Color indications inform when the bar can be locked. False positioning of the Kelly bar during the shake-off process is indicated through a warning signal upon misapplication.

Lee & Sims originally intended to rent the LB 36-410 rig for the Harbor River Bridge project, but ultimately decided to purchase it instead.

“It was a good fit for this project and a good fit for our business model,” Sims says. “The LB 36-410 will probably be headed to south Georgia in the fall for an upcoming project that requires drilling several deep, large diameter shafts.”

Check out the Profit Matters channel. Discover helpful tips, articles and more to squeeze the most profit from your projects and improve your bottom line.
June 1, 2021
Latest