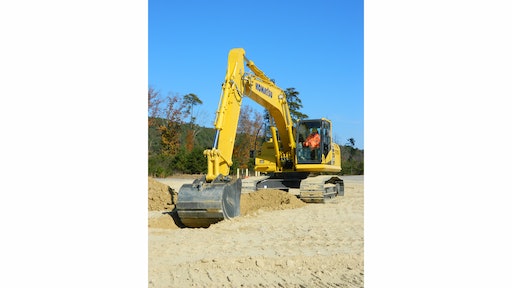 “The PC210LCi-10 represents a huge leap forward by bringing automation features to excavators,” says Jason Anetsberger, product manager of Intelligent Machine Control. “Thanks to the exclusive semi-automatic control function, customers will unearth their productivity and operators can focus on moving material while the machine semi-automatically protects the target surface.”

The 158-hp, 52,000-lb. PC210LCi-10 has the same basic specs as the standard PC210LC-10. What’s different is the standard machine control system that is fully integrated at the factory.

Like the four intelligent machine control dozers that came before it (the D51 EXi/PXi-22 was introduced in early 2014, while the D37i-23 and D39i-23 were formally launched at CONEXPO-CON/AGG 2014), the intelligent excavator utilizes stroke-sensing hydraulic cylinders, an inertial measurement unit (IMU) and GNSS receiver technology to deliver fine grading accuracy. However, the technology has been specifically adapted to the unique needs of excavator operation, providing the ability to achieve grading accuracy of just over 1/10th of a foot.

The bucket cylinder, arm cylinder and one of the boom cylinders on the PC210LCi-10 incorporate Komatsu's proprietary stroke-sensing technology. "We’re able to very accurately know the placement of those cylinders so that we know where the cutting edge is relative to the body of the machine," says Anetsberger. "Mounted to the machine, we also have an inertial measurement unit. That sensor measures the attitude of the machine." In other words, it determines if the excavator is rolled to the side, pitched forward or pitched up. "Finally, mounted on the hand rails behind the cab forward of the counterweight and engine compartment, we have our GNSS antennas."

Inside the cab is a large control box monitor featuring Komatsu’s proprietary interface. "This 12.1-in. control box allows us to very clearly, in a simple graphic format, convey the grade information to the operator," says Anetsberger.

"The machine is going to limit [the operator] from over excavating – digging below the design surface," says Anetsberger. "It will prevent him from going below grade. It will also allow him to trace the grade automatically… for a nice finish grade performance. It allows him to focus on his operation without have to follow a light bar or some sort of indication to see if he’s on grade or not."

Another key feature is minimum distance control. "With conventional aftermarket machine guidance, the operator needs to manually set where the focal point or guidance point is along the bucket - for example, the left tip, the right tip or the center of the bucket," Anetsberger explains. "We have those abilities with this system, as well, but we’ve gone above and beyond that and offered the minimum guidance feature, where the system is automatically going to calculate which point of the bucket is closest to grade."

Another unique benefit is the facing angle compass. "Again, using that slope example, this compass allows us to square the machine to the slope, basically getting the bucket’s cutting edge perpendicular to the slope," Anetsberger indicates. "To have the best finish grade accuracy, you want that cutting edge lying flat on that target surface. If you’re off a little bit, rotated slightly, one tip would be contacting and the other tip would be high. With this facing angle compass, it allows the operator to place the bucket perpendicular to the slope. That might seem easy, but it is actually quite difficult if you didn’t have this tool, especially if you consider a machine sitting on an uneven surface."

The excavator can also be used in guidance or indicate-only mode if needed. This is made easier via the enhanced monitor, which displays readouts for elevation and the conventional lightbars. "We also add audio guidance," says Anetsberger. "You can select different tones that play at predetermined or preset distances away from target grade, so you don’t need to be staring at this control box or at the lightbar to know how far away you are from grade."

Finally, the PC210LCi-10 can be equipped with a cellular modem that enables the machine control system to integrate with Topcon SiteLink 3D Enterprise jobsite management technology. This enables the job file, targeted design surfaces and tasks to be sent to the operator at the start of the shift, and as-built data to be sent to the office from the machine at the end of the shift.

As you might expect, the PC210LCi-10 with machine control comes at a higher cost than the standard model PC210LC. "There is a premium, as there was between the standard bulldozer and a model with machine control," acknowledges Peter Robson, director, Intelligent Machine Controls at Komatsu. "It’s a significant premium but it’s [one] that the majority of customers do see a return on investment in 12 to 18 months."

Return on investment stems in part from the elimination of grade staking and reduction in rework on a project. "Thhere are no grade stakes out there; there’s nobody else out there in the working environmental," Robson comments. Then consider the cost to replace bedding material due to over excavation at, say, $50 to 60 per cu. yds. on a 100-yd. trench. "Already you can start to do the math of the savings potential of these machines."

Next, add in the time savings associated with using machine control. "The time taken to pull out 100 ft. of trench or slope is going to relate back into fuel savings – gallons per hour removed – because you’re not going to have as much idle time waiting to do grade checking," Robson points out. "You’re going to constantly be able to make your performance from point A to point B very accurately and in time, and really reduce fuel consumption."

This in turn equates to environmental benefits. "With less fuel burn, you have less CO2, you have less NOx," says Robson. "So as far as sustainability goes and your impact on the environment... you’re definitely going to make a large reduction in your carbon footprint."

There is definitely an overall savings vs. conventional methods. "We’ve compared this machine against conventional operation – stakes, no GPS, no machine guidance whatsoever – and we saw a reduction of 63% in construction time, which is a huge number," says Anetsberger. "That’s just one example of a hard figure that we’ve seen in our own testing here at Komatsu."

Robson sees PC210LCi-10 machine control excavator as a stepping stone for future introductions. "[The technology] is scaleable within the excavator range, so I think within the next 12 to 18 months, you will see it in other models," he states.

Which size classes will depend largely on customer applications and requirements. "It’s the utilization that a contractor sees and the ROI factor," Robson comments. "But I think the prevention of over excavation is really going to spark a lot of interest in the marketplace and in the customer base."

"I think a lot of customers have been waiting for this ability to add automated machine control to the excavator vs. investing in the previous machine guidance indicate-only technology," says Anetsberger. "For forward-thinking contractors, small or large, this machine has a place with them."

Robson adds, "[Machine guidance] has been around for excavators, but it’s truly in its infancy stage. But considering what we’ve seen with the intelligent dozer, I think there’s going to be an instantaneous attraction to it with those customers that have already moved into the intelligent dozer world.

"There’s no doubt that every year, machine control is growing at a phenomenal rate," he continues. "Where’s the saturation point? We don’t know yet… We hope to see it increase greatly in volume."