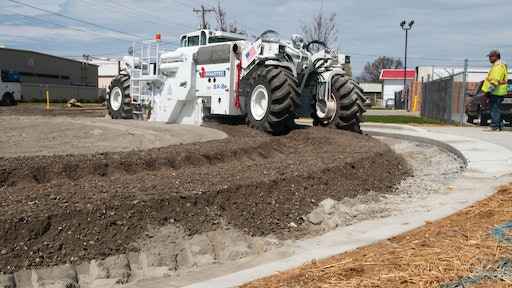 It took just 10 days for Blount Construction to complete full-depth reclamation on a 1.5-mile stretch of three-lane asphalt roadway in the Atlanta area. Blount attacked the job with two stabilizers, and one of them was the all-new 755-hp SX-8e stabilizer-reclaimer from Roadtec.

The project, located on Six Flags Drive in Cobb County, involved reclaiming 4 inches of asphalt and 5 inches of stone base, says Doug Myers, general superintendent with Blount’s reclamation division. Cutting 10 inches deep, the SX-8e moved along at 45 feet per minute. “It cut that material like it was butter,” Myers says.

The Cobb County project was one of Blount’s first with the new Roadtec stabilizer. On another project, a parking lot, the contractor used the SX-8e to stabilize the soil with cement – working 21 inches deep.

The first step on the Cobb County project was to spread Portland Cement on the deteriorated asphalt at a rate of 45 pounds per square yard, using a spreader truck. Next came the SX-8e, working 8 feet wide. The roadway was 36 feet wide, so it required five passes to cover the full width. “We’re injecting water as we mix the cement into the recycled material,” says Myers. “Our mix design calls for the addition of 1.5 to 2 percent of water by weight.”

A single-drum padfoot machine, follows the stabilizer to achieve deep compaction. Next Blount used a motor grader to shape the roadway, and followed that with more passes from the padfoot roller. “Then we put a rubber-tired roller on it, and we ran a steel drum roller behind that,” says Myers.

Blount performed the project under traffic. The contractor took two lanes to work on, and guided traffic through the remaining lane with a pilot car. Then traffic shifted over to the reclaimed two lanes and Blount finished reclaiming the single lane.

“We’re reclaiming, compacting and grading the road, and then Cobb County will come back and put on a 3.5-inch overlay of hot mix asphalt,” Myers says.

Myers, who has operated the SX-8e, says he likes the cab on the machine. The cab can shift 18 inches past the machine’s right side, for improved visibility. The seat and console can rotate up to 90 degrees, to give the operator a better view of his work. And rear cameras enable the operator to see behind the machine.

Soil stabilization is proving to be the optimum solution whenever the properties of soil have to be altered to make it suitable for further roadworks
January 7, 2019

Wirtgen soil stabilizers and Hamm rollers teamed to create the load-bearing base for the nearly 77-acre site
July 30, 2018