Do You Know Your ABCs of Heavy-Duty Coolants? 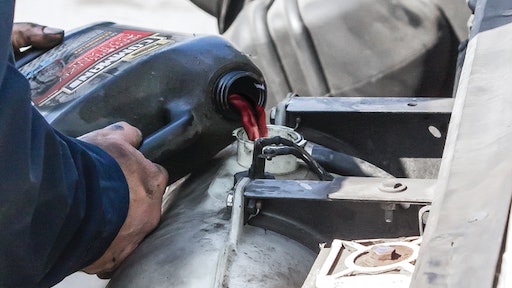 The importance of regular service intervals for heavy-duty diesel engines is well understood. Yet, too often, the service focus is on things other than the engine’s cooling system, such as air, lube and fuel filtration, say officials at Cummins Filtration. That could result in additional downtime and repair later on, they say, and note that research has shown that 40% of all engine problems in heavy-duty diesel engines are related, directly or indirectly, to improper cooling system maintenance.

If not properly cooled, the temperature of a heavy-duty diesel engine can reach up to 2,000° C (3,632° F), which would easily be enough to melt the engine, the officials point out. The heat must be dissipated or the engine can’t operate at its maximum potential.

Only one-third of the total heat energy produced is converted into mechanical energy used to move the vehicle. Another third is removed as heat energy by the exhaust system, and the remaining third is taken away by the coolant. The heat removed by the antifreeze/coolant (AFC) is critical to ensuring that the engine operates properly. Consequently, the Cummins Filtration officials emphasize correct coolant maintenance is the key to reducing operating costs, minimizing engine downtime and ensuring better reliability and durability from engines and cooling systems alike.

AFC producers have worked extensively over the years with heavy-duty engine manufacturers, as well as organizations such as the American Trucking Association's Technology & Maintenance Council (TMC), an organization working to improve transport equipment, its maintenance and maintenance management; ASTM International, a standards development organization; and SAE International, which develops recommended standards for safe, efficient and effective engine operation. Many decades of industry research has led to the discovery of exactly what the specific properties of an effective heavy-duty antifreeze/coolant are, says Dilley. Great pains have been taken by AFC producers to refine the “science” behind their formulations, all with the final goal of developing a product that optimizes heavy-duty engine performance.

“Today, inhibited ethylene glycol – along with propylene glycol, a similar, less toxic, odorless, colorless, viscous organic compound – remains the major component of antifreeze/coolant,” says Dilley. “Recent years have seen a number of new inhibitor technologies for these formulations enter the market as heavy-duty engine manufacturers have refined the capabilities of their products."

“Since both water and antifreeze are colorless, manufacturers add a colored dye to the solution so the user can differentiate between it and other underhood fluids and more readily know if a heavy-duty engine is experiencing a coolant leak," Dilley points out. "Traditionally, most commonly used antifreeze/coolant has been dyed green.”

The growth in the number of available antifreeze formulations has caused manufacturers to use different color dyes for different types of antifreeze/coolants. An unintended aftereffect is that the current AFC market has become cluttered, confusing and downright frustrating, due to the multiple formulas to choose from in various colors and for different engine types.

TMC Recommended Practice RP 351, Guidelines for Color Standardization of Engine/Coolant Antifreeze offers the guidance for standardization of engine antifreeze/coolant based on antifreeze type, Dilley observes. (See chart: Antifreeze/Coolant Type by Color.) It should be noted that these are guidelines for specific colors for specific coolants and not hard-and-true regulations. This means manufacturers may still select their own dyes as they see fit. Therefore, antifreeze/coolant color should not be used as a positive indicator.

According to Dilley, the basic types of AFC include:

Inorganic Acid Technology (IAT): This is the chemical basis for the traditional green antifreeze. Nowadays, fully formulated purple formulas with a pre-charge of supplemental coolant additives (SCAs) are available, and these do not require the addition of SCA until the first maintenance interval, at 25,000 miles or as specified by the engine manufacturer. However, be careful on choice as some green formulas do not have an SCA precharge.

Hybrid Organic Acid Technology (HOAT): This is a combination of some of the inhibitors used in inorganic IAT and organic OAT antifreeze/coolants. This technology is typically based on a low-silicate, nitrite technology and, like the IAT coolants, is recommended to have SCA added at the first maintenance interval, at 25,000 miles or as specified by the engine manufacturer. HOAT coolants may not be compatible with certain NOAT or OAT coolants and should not be mixed with them.

Nitrited Organic Acid Technology (NOAT): This is often referred to as Extended Life Coolant because this coolant type does not require a supplement, referred to as an extender, until 300,000 miles. NOAT AFCs use organic acids (organic additive technology), nitrite and/or molybdenum as part of their inhibitor package.

Organic Acid Technology (OAT): This is a combination of organic acids and other inhibitor chemistries that remove the need for regular additions of supplemental coolant additives (SCAs), so the coolant lasts longer than IAT or HOAT AFC. OAT coolant typically is good for about 600,000 miles, but its performance life can be drastically reduced if contaminated with nitrite-containing coolants.

A Matter of Concentrations

“Most people don’t realize that pure antifreeze actually freezes at a higher temperature and transfers less heat from an engine than a 50% antifreeze/water solution,” observes Dilley. “That’s why it’s recommended that antifreeze be mixed at a proper 50% proportion of both water and antifreeze."

If the concentration is less than 30% antifreeze, the following problems may occur: temperature extremes; overheating with boilover; freeze-up that can cause cracks in the head or block; cooling system component corrosion; and increased incidence of pitting in the cylinder liner.

“On the other hand, cooling systems with a concentration of antifreeze that exceeds 70% may experience temperature extremes; slushing of the coolant; poor heat transfer that can result in overheating; additive precipitation; water pump leaks; cooling system corrosion; and cooling system component fatigue," Dilley adds.

In addition to protecting the engine from overheating and freezing, another key requirement of antifreeze/coolant is to prevent the cooling system from degrading and to defend components against corrosion.

“To that end, because glycol and water are naturally corrosive, coolant manufacturers add different inorganic and/or organic salts and other chemicals to the coolant in order to prevent the cooling system components from corroding,” Dilley explains.

These additives are known as corrosion inhibitors, with some of the more common ones being:

“Because additives in conventional (IAC) and hybrid organic acid (HOAT) coolants are consumed during the vehicle’s operation, they must be re-fortified with supplemental coolant additives in order to maintain effective corrosion protection,” Dilley stresses. “On the other hand, OAT and NOAT coolants do not require SCAs.

“Also note that the inhibitor package does not determine the level of freeze or boilover protection in the coolant," he continues. "The inhibitor is responsible for corrosion protection only.”

“Most modern-day coolants have been formulated to meet the performance requirements for the life of the engine,” says Dilley. “But in heavy- or severe-duty conditions, taking the proper care to maintain the cooling system and its fluids will help keep vehicles running at their efficient and reliable best throughout its serviceable life.”

This includes choosing the appropriate antifreeze/coolant for the vehicle and its application.