President of the Republic of Italy, Sergio Mattarella, awarded Flash Battery's CEO, Marco Righi, the Premio dei Premi award for the company's investment in research and innovation on the development of cutting-edge, competitive technology. 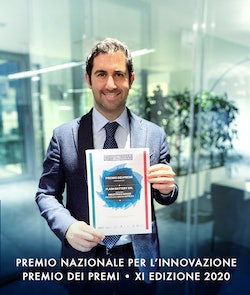 The Premio dei Premi award — instituted by the presidency of the Council of Ministers, an initiative of the President of the Republic — puts the finishing touch on 2020 that will certainly end up in Flash Battery's history books. Earlier this year, the leading manufacturer of lithium batteries for industrial machinery and electric vehicles was also recognized as the Best Company Under 40 in the Emilia-Romagna region and awarded the Deloitte prize as Best Managed Company — a repeat success in both cases, having also won those same awards in 2019.

In addition, just a few weeks ago, the company was listed 58 in the rankings of 400 Italian companies recognized as Champions of Growth for the 2016 to 2019 period — a list curated by the Istituto Tedesco Qualità e Finanza and La Repubblica.

The President of the Republic of Italy himself, Sergio Mattarella, awarded — via video stream — the prestigious Premio dei Premi prize for innovation to Flash Battery CEO Marco Righi. It was reserved for nine of the 12 companies that won the national Imprese per Innovazione award, organized by the Italian Manufacturer's Association in collaboration with the Giuseppina Mai Foundation — with additional support from BNP Paribas and Warrant Hub.

"We are very pleased, and very proud to receive these awards," said Righi. "Especially the Premio dei Premi, both for the honor of meeting the President, and for the motivations that led the jury to award us this extraordinary recognition."

According to the jury statement, Flash Battery was recognized, "For the company's investments in research and innovation for the development of cutting-edge, competitive technology for a world market in constant, rapid evolution."

CEO Marco Righi explained, "These motivations get right to the heart of our business, closely tied to the research being worked on by so many of our young employees — 62 in all, with an average age well under 40 — and that has been the key to everything we've built during this period of growth."

Founded in 2012 by Righi and Alan Pastorelli, the company's technical director, Flash Battery will close out 2020 with over 14 million euros in turnover, a higher figure than 2019 notwithstanding the disruptive events of last spring during the pandemic and the lockdown.

"The most important data point from this year is the significant investment we've made in human resources," Righi explained. "We hired 14 new professionals, most of them quite high-profile, including our new Sales Director Matteo Donelli, and most of them involved in those very processes of research and innovation that earned us the Imprese per Innovazione prize and, in the second and final round, the Premio dei Premi."

[VIDEO] Battery and Charging Trends for the Construction Industry

Tips to Help Your Battery Survive on the Construction Site

The key to achieving trouble-free service from construction vehicle batteries is to properly spec the correct battery type and to ensure the batteries are always kept in their proper State of Charge (SOC).
EnerSys
September 23, 2019

Charge and desulfate any type of 12-volt lead-acid battery both on single batteries or those connected in parallel
PulseTech Products Corporation
April 12, 2019

Innovative Vanair Super Capacitor works with a self-contained alternator on the unit to start the vehicle and recharge the capacitor instantaneously
Vanair Manufacturing
March 5, 2019

Winter weather is no doubt hard on equipment’s starting batteries but most of their death spirals likely started under excessive heat
December 5, 2018

Video: What is an AGM Battery, and What Distinguishes Trojan C-Max ?

'The Associated 6033 load tester is the quickest way to figure out whether a battery is good or bad. I use it every oil change'
August 30, 2013

Maintains charge and desulfates up to eight 12-volt lead-acid batteries at one time, or in 24V, 36V and 48V series configurations
PulseTech Products Corporation
July 16, 2013

In this Caterpillar preventative maintenance video (1:24 min.) see what causes battery failures - and get some great tips on how you can prevent them
July 15, 2013
Follow Us