To achieve the US Department of Energy's goal of 55% thermal efficiency, engine manufacturers will continue to bring new technologies to construction equipment 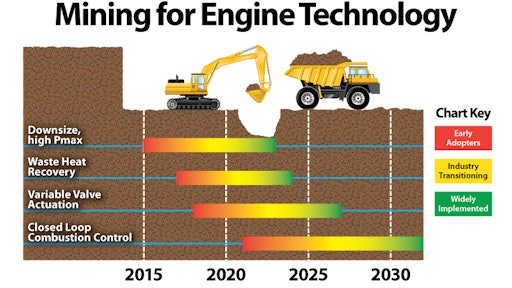 Engine manufacturers are on the continual quest to maximize productivity, increase reliability and decrease the cost of operation, all while meeting stringent emissions regulations. While EPA Tier 4 has provided a dynamic and exciting period for engine advancements, we are prompted to ask, “What’s next?”

Current thermal efficiency of a diesel engine is around 40% to 45% and the U.S. Department of Energy (DOE) has set a goal of 55% by 2020. Closing this gap will require innovative technologies that not only improve efficiency, but are also capable of commercialization. Even if a technology is capable of improving fuel consumption by 5%, there will be little demand if it takes 10 years for customers to recoup their investment

Achieving the desired three- to five-year return on the technology investment is the biggest challenge for many technologies. This places emphasis on developing low-cost materials and manufacturing options. Ricardo’s technology experts weighed in on the subject and offered their insights on four selected technologies that are likely to make an impact on engine efficiency (predominantly diesel) within the next five to 15 years.

Downsizing is a term used to describe an engine that has a physically smaller engine displacement, but is capable of matching the performance of the original engine. The target is to decrease engine displacement by more than 10%, which translates into improving fuel efficiency by 1% to 4%. Downsizing may be more prominent on smaller off-highway equipment than in larger mining applications. In some applications, down speeding is also an option to realize efficiency improvements. For example, a reduction in engine speed of 200 rpm could result in a 1% to 3% fuel economy improvement.

Increasing cylinder pressure correlates to the effective compression ratio and/or complete ignition of the fuel. Neither of these can be done without considering the additional stresses that will be placed on the engine block, cylinder heads, critical fasteners, etc. Material selection and design is vitally important. There is a movement toward higher strength iron alloys, which show a 75% increase in tensile strength when compared to cast iron. Compacted graphite iron is one example of a newer material that is providing increased strength and the potential for smaller package size.

Fuel injection and in-cylinder air/fuel mixing is another area that is targeted for improvement. Fuel pressure will continue increasing to improve fuel delivery and combustion, which results in increased performance and reduced emissions. Improving spray atomization and injection strategy are other fuel delivery advancements where work is being done to improve mixing and avoid spraying the cylinder walls, which results in cylinder wall washing and an increased amount of soot.

The piston and head designs are also receiving attention to increase combustion efficiency. This builds upon technologies such as Ricardo’s Twin Vortex Combustion System (TVCS), which is currently in use to reduce soot by splitting the fuel spray into an upper and lower vortex to better manage the air-fuel ratio. This results in lower engine-out emissions and better fuel efficiency.

Converting waste heat into energy has been drawing a lot of attention within the engine industry, and for good reason. Approximately 50% of the energy produced in an engine is waste heat. Exhaust heat accounts for approximately half of the wasted heat energy (i.e., 25% of the total energy). Recovering energy from the wasted exhaust heat is the primary area in which waste heat recovery (WHR) systems recapture energy.

There are two primary methods for energy recovery: direct and indirect. Direct methods generate electricity from the waste heat by using a thermoelectric generator (TEG). A TEG relies on dissimilar metals that generate voltage when exposed to a temperature delta — similar to a thermocouple. The electricity generated in the device can be used to supplement accessory loads by reducing the power required from the engine’s mechanical power transfer (through the crankshaft) and instead produce and store electrical energy. Indirect methods utilize the waste exhaust heat or waste heat from the coolant to generate mechanical or electrical power. The most common is the Rankine cycle, which uses the heat to generate steam and turn a steam expander. Goals have been set by the DOE to develop WHR that will improve fuel efficiency by over 7.5% by 2020.

The two biggest challenges for these technologies to reach commercialization is to increase efficiency and decrease cost. Right now, thermoelectric generators are approximately $3,000/kW, but the target is <$1,000/kW. WHR operates on the principal of extracting energy from the temperature differential that exists between two heat sources. Therefore, the efficiency of the system depends on the duty cycle (exhaust temperature) of the engine.

Research is being conducted on lower cost materials that are capable of operating at lower temperatures. Technology developers are also working with exhaust system integrators to minimize manufacturing costs and reduce packaging space.

Variable valve actuation (VVA) for heavy-duty engines is essentially the same concept that is used on light-duty automotive applications. However, heavy-duty engines operate at a lower engine speed (<1,800 rpm) than automotive engines. This requires valve timing and activation to be optimized differently. It must also meet the expected useful life of the engine, which is typically more than five times longer than a typical automobile engine.

VVA is also an enabling technology for other technologies, such as cylinder deactivation, bottoming cycle and/or Atkinson cycle operation when high peak power is not as critical as higher low-speed torque, for example. If VVA is optimized for the machine’s operating cycle, parasitic losses can be reduced, allowing the engine to operate in a higher efficiency range. It can be expected that a 2% to 3% increase in efficiency can be achieved. However, as a result of cylinder deactivation, durability and reliability issues such as mixed mode torsional vibration must be understood and managed.

However, adding complexity to the system adds cost and potential reliability risks. Sensors must be added to the cylinders to monitor pressure and temperature, along with a downstream NOx sensor and a controller that is capable of quickly processing the data. It is expected to add approximately $30 to $50 per cylinder to the system. However, the base technology has been proven in automotive engines so it is a matter of scaling and developing it for the heavy-duty engine environment.

These are just a few of the technologies likely to become common in the next wave of technology deployment as drivers such as emissions legislation and the continuing economic incentive to reduce operating costs remain. Expectations will no doubt be met with innovative technologies that will result in lower emissions, improved efficiency and, ultimately, improved productivity for off-highway equipment.

Mark Kuhn and Joshua David are with Ricardo Strategic Consulting (RSC). RSC is active in the off-highway market and offers a comprehensive portfolio of management consulting services, addressing high-impact strategic issues and solving operational problems at every stage of the value chain. Please visit www.ricardo.com/rsc for more information.

Growing the Demand for Biofuels in Off-highway Equipment Applications