Growing the Demand for Biofuels in Off-highway Equipment Applications

Will advancing technology lead to the increased use of ethanol and biodiesel within the off-highway equipment industry? 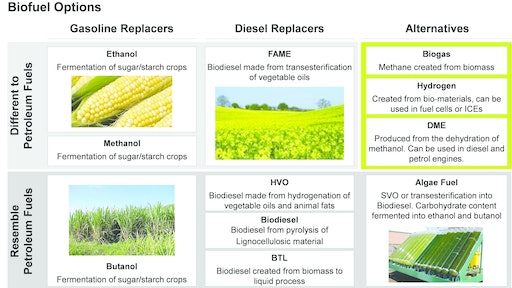 The infographic highlights the different types of biofuels and the materials from which they're derived. Source: Ricardo Strategic Consulting

The use of biofuels dates back to the very beginning of the diesel engine itself, which was built by Rudolph Diesel in the 1890s using peanut oil as the fuel. Fast forward 120-some years and biofuels are still used, albeit in a relatively small quantity. Using a pragmatic approach, I’ll review the current status of biofuel development and the key drivers that may contribute to increased biofuel adoption.

A biofuel is any fuel produced from living organisms that provides an alternative to non-renewable fossil fuels. The most common biofuels in use today are ethanol and biodiesel, although there are other biofuels such as butanol and propanol.

There are currently four generations of biofuels, each driven by the quest to find a higher output biomass that does not compete with food crops. First-generation biofuels are produced from sugars, starches, oils and animal fats; the second generation is made from non-food crops or agricultural waste (biomass); third-generation biofuels use algae and quickly growing biomass; and the fourth generation derives from genetically modified plants that grow on non-agricultural land or bodies of water and produce higher energy yields. Currently, 99% of biofuels sold are either first- or second-generation types.

Demand for biofuels in the U.S. has been stimulated through the Renewable Fuel Standard (RFS). The RFS policy was originally enacted in 2005 to help accelerate biofuel development, with the goal of having 36 billion gal. of biofuel blended into transportation fuels by 2022. Biofuels are represented by a letter prefix — “E” for ethanol and “B” for biodiesel — and a number corresponding to the percentage used in the fuel mixture. If the number is less than 100, then the remaining percentage is petroleum-based gasoline or diesel.

Most of the gasoline sold in the U.S. contains up to 10% ethanol (E10), whereas E85 stations represent approximately 2% of the public fueling stations. B20 biodiesel blend is rarer, with less than 0.5% of public U.S. stations carrying the fuel.

Some states are trying to change this by setting their own biofuel requirements. For example, Minnesota requires all transportation diesel sold from April to October to be a B10 blend, with B5 required during the winter months.

In 2013, annual biofuel production was 13 billion gal. of ethanol and 1.8 billion gal. of biodiesel, which represents approximately 10% of the fuel consumed in the U.S. In 2014, the EPA proposed a similar overall quantity of biofuel. However, the distribution has shifted more in favor of second-generation and newer production processes. At least four production plants are planning to produce second-generation cellulosic biofuel, but future increases will depend on the final ruling of the RFS.

Barriers to Greater Use in Off-highway Equipment

From a cumulative power standpoint, the off-highway market is approximately 90% diesel fueled. Therefore, it is likely that greater emphasis will be placed on biodiesel rather than ethanol. Switching costs, maintenance, productivity and fuel prices are all key factors when deciding whether a biofuel is an economically beneficial choice.

Switching costs between running biodiesel and diesel are small or negligible to the end customer. The fundamental engine architecture between the fuels is identical, which allows them to be used interchangeably. Depending on the biodiesel’s chemical properties, some components made of nitrile rubber compounds, such as hoses, gaskets, plastics and seals, are susceptible to degradation. Engines compatible with B100 use compatible materials such as Teflon, Nylon and fluorinated plastics. Currently, all major diesel engine manufacturers support the use of B5, 78% support the use of B20 and only a handful support the use of B100.

Maintenance is another important cost driver. When compared to petroleum-based diesel, biodiesel provides improved lubricity, potentially extending engine component life. However, it is also more prone to sticking on the cylinder walls and blowing past the piston rings into the crankcase.

The California Air Resources Board (CARB) noted in a durability study that most of the 40 observed fleets did not have an oil dilution issue. However, nine fleets experienced fuel filter plugging after initially switching from diesel to biodiesel, and that occurred most often when B20 or greater blends were used. Also, in the winter months, some of the fleets located in colder regions had to switch to petroleum-based diesel. This is because biodiesel has a higher cloud and pour point, causing it to gel at a higher temperature than conventional diesel fuel.

Productivity comes down to how efficiently the machine can transfer power into work. Biodiesel has roughly 8% less energy content than diesel, which correlates to 5% to 7% less power, and therefore lower fuel economy. Studies have shown that B20 and lower blends typically do not show a noticeable power loss to the operator in real-world operation. Power loss could create an issue for equipment operators who run high-load duty cycles, such as wheel loaders. Equipment manufacturers would need to consider this potential de-rating when specifying an engine that is B100 compatible.

Fuel cost is a large portion of a machine’s total operating cost and is very important when selecting which fuel is used. Using U.S. Energy Information Administration (EIA) January 2014 data, diesel was approximately $3.89/gal. compared to $3.97 for B20 and $4.28 for B100. While the EIA only publishes on-highway diesel prices, they should compare favorably on a percentage basis with off-road diesel, which is on average 55 cents less expensive.

B100 carries a 10% premium while delivering 10% less power. Another way to look at it is the equivalent power output (work) will cost 22% more. This explains why there is minimal demand for biodiesel at the current cost rates. However, the U.S. Department of Energy (DOE) has announced it is estimating a cost of $3.00/gal. by 2022. The economics behind the proposed cost reduction will likely require increased biodiesel production to reduce production costs through economies of scale, as well as government incentive programs.

Natural gas, like biofuels, has its challenges (infrastructure, storage, etc.), but it is approximately 60% less costly than biodiesel on a diesel-gallon equivalent. This provides a substantial advantage that is likely to support increasing adoption in many applications, especially in higher horsepower applications where fuel consumption is high. The effect that natural gas will have on biofuel use is unknown. However, for biodiesel to be competitive, it will need to be capable of competing with other alternative fuel options, such as natural gas and dual-fuel engine upgrades.

Biofuel is a home-grown, sustainable source of fuel that would decrease dependence on foreign oil while creating more U.S. jobs. Advances in technology are working to increase production output and decrease costs. Until that occurs, biofuel demand will follow the federally mandated level stated in the RFS, and will likely see low adoption rates until a more attractive cost/benefit scenario prevails, or higher cost conventional petroleum prices exist.

Joshua David is an associate with Ricardo Strategic Consulting (RSC). RSC is active in the off-highway market and offers a comprehensive portfolio of management consulting services addressing high-impact strategic issues and solving operational problems at every stage of the value chain. For more information, visit www.ricardo.com/rsc.