Renewable diesel uses the same feedstocks as biodiesel but has its distinct benefits. 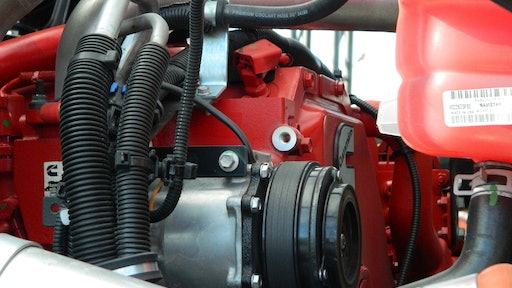 While most major engine manufacturers have a recommendation for B20 biodiesel or higher, there has been little word yet for or against renewable diesel fuel.

By now, most are familiar with biodiesel. It is a cost-effective and more environmentally friendly alternative to conventional petroleum-based diesel fuels when used in the correct applications.

However, there are limitations when compared to petroleum-based diesel. Biodiesel typically has a higher cloud point, which means it may not perform well in low temperatures unless blended with traditional petroleum-based diesel; it has a tendency to absorb more moisture; and it typically produces slightly less power and fuel economy when used in higher blends.

Biodiesel comes blended with petroleum diesel fuel in various ratios, from B5, which is 95% petroleum diesel and 5% biodiesel, all the way up to B100, which is pure biodiesel. Engine manufacturers often publish the maximum content of biodiesel recommended, such as B10 or B20.

“Notably, all of the Big Three auto makers — Ford, General Motors and Fiat Chrysler — have supported high biodiesel blends for nearly a decade,” says Little. “Among U.S. heavy-duty truck segments, which account for more than 87% of actual diesel fuel usage, every major engine manufacturer has a recommendation in their owners’ manuals for B20 or higher, except for Daimler’s Detroit Diesel. Vehicle manufacturers don’t warranty fuel, rather just their own parts and workmanship.”

Perhaps the biggest hurdle for biodiesel is the availability of feedstocks to produce it. It is typically made from oils and fats such as soybean oil or used cooking oil, with soybean oil the most common feedstock. These sources are simply not capable of producing enough quantity to completely replace petroleum-based diesel.

The inherent limitations of biodiesel could soon be addressed by an emerging fuel source known as renewable diesel. “Renewable diesel is a drop-in fuel,” says Joanne Ivancic, Advanced Biofuels USA. “It can replace petroleum diesel completely. Also, it has no sulfur and has other properties that make it better than petroleum-based diesel.”

“Like biodiesel, renewable diesel helps address the over-the-road and heavy-duty challenges,” he continues. “Some alternative fuels are optimized for centrally fueled fleets — those with short range or those with less need for pulling power. Diesel alternatives work in existing diesel infrastructure and engines and give users the flexibility to use what is readily available. They are the only solutions that are proven to work in heavy hauling, long-distance capacities.”

But understanding and acceptance of renewable diesel is still in the early stages. “While biodiesel has been produced in the U.S. for more than a decade, renewable hydrocarbon diesel is relatively new to the market in commercial volumes,” says Little, “so there have been fewer statements from equipment manufacturers of support or caution.”

There are many similarities between biodiesel and renewable diesel. “Renewable diesel is a bio-based fuel, derived from a variety of waste agricultural feedstocks, that meets the same standard as traditional petroleum diesel fuel yet substantially reduces carbon emissions with additional air quality benefits,” says Allen Schaeffer, Diesel Technology Forum. “Renewable diesel fuel can immediately improve the emissions performance of older diesel vehicles and equipment and enhance the already impressive emissions reduction of new technology diesel engines, without sacrificing power or performance, at a price competitive with traditional diesel fuel.”

Technical hurdles to the adoption of renewable diesel are minimal. “As renewable diesel fuel meets the same standard as traditional diesel fuel, fleets do not incur additional fuel infrastructure investments or [need to] modify vehicles to operate on that fuel,” says Schaeffer.

Transesterfication is the process of removing esters from oil. The molecules in biodiesel are primarily Fatty Acid Methyl Esters (FAMEs).

Renewable diesel is often produced from a process called hydrotreating, which is already being utilized in today’s petroleum refineries. During this process, hydrogen replaces other atoms such as sulfur, oxygen and nitrogen and converts the oil’s triglyceride molecules into paraffinic hydrocarbons. The resulting renewable diesel reduces waste and by-products, yields a higher energy density and improves cold flow properties, according to the Diesel Technology Forum. This process also enhances the blended fuel storage and stability of the finished biofuel product.

But hydrotreating is only one method of producing renewable diesel. According to the Diesel Technology Forum, other methods under consideration for creating renewable diesel fuel include biomass-to-liquid (BTL) and thermal conversion process (TCP) technologies. The former converts biomass through high-temperature gasification into synthetic gas or “syngas” and then uses a Fischer-Tropsch process to catalytically convert the syngas to liquid fuel. TCP processing converts biomass or other carboneous material into a “bio-oil,” which is then refined into diesel-like fuel. Both BTL and TCP offer the potential to convert large volumes of cellulosic biomass into liquid fuels, but need further development and remain far from being economical for large-scale fuel production.

But it is important to note that ASTM D975 actually does not address all considerations of using diesel fuel in engines. For example, renewable biofuels have different cetane (ignition) ratings, which means that the engine will ignite and burn these fuels differently. To ensure the best engine performance it is important that prospective users verify the use requirements with their engine manufacturers.

“Renewable diesel comes with the added benefit of reducing emissions of oxides of nitrogen (NOx), an ozone-forming compound, and particulate matter (PM) or soot relative to petroleum diesel fuel,” he continues. “Equipment owners who have not made the transition to the latest generation of clean diesel equipment may demonstrate clean air benefits to communities when operating older equipment using renewable diesel fuel. Equipment owners operating the latest generation of clean diesel equipment using renewable diesel fuel will demonstrate even greater air quality benefits to communities.”

“Much of the renewable hydrocarbon diesel available today is imported from Singapore,” Little points out. “It is widely available along the West Coast and made cost competitive through incentive programs like California’s low carbon fuel standard. In the Midwest, in cities without easy access to foreign ports, and places without added incentives, importing fuel is not practical or cost competitive.”

This could change over time. “There are two U.S.-based renewable hydrocarbon diesel facilities, both in Louisiana,” says Little. “Diamond Green Diesel recently announced a plant expansion. And the REG facility is expected to resume production later this year. Domestic production remains optimal for fleets focused on big picture sustainability.”

Increased supply will be necessary to become a mainstream fuel source. “Cars and trucks in the U.S. consumed about 40 billion gal. of diesel last year,” says Schaeffer. By way of reference, 1.4 billion gal. of biodiesel were produced and renewable diesel fuel was a fraction of this level of production. However, interest in the fuel among fleets and equipment owners across the country could help encourage more availability for the product to meet growing demand.”

Currently, the West Coast is driving demand. “Interest in the fuel is growing and availability in the West Coast, and California in particular, is expanding given the economics and low-carbon fuel standards in California that encourage low carbon liquid fuels,” says Schaeffer. “The City of San Francisco announced at the end of 2015 that it is using 100% renewable diesel fuel in all of the diesel vehicles and equipment in the city’s fleet. Oakland is following its sister city across the bay, while New York City announced that it intends to operate its enormous fleet on renewable diesel when the fuel is available on the East Coast. Still yet, UPS announced that it will purchase 46 million gal. of fuel for use in its fleet.”

Renewable diesel can be used as a strategy to achieve sustainability objectives. “Fleets and equipment owners who have chosen to switch to renewable diesel have done so as part of a low-cost strategy to meet sustainability goals,” notes Schaeffer. “Renewable diesel fuel can allow fleets to substantially reduce carbon emissions and petroleum use and improve air quality without sacrificing power, performance, driving range and other attributes, all at a price competitive with petroleum-based fuel.”

Switching from petroleum-based to renewable diesel in older machines could have a big impact on the environment. “For many states, expanded use of renewable diesel fuel in older in-use vehicles and equipment can provide air quality benefits,” says Schaeffer. “With interest in the fuel growing, we hope that availability expands, as well.”

Volvo Trucks Approves Use of Renewable Diesel Fuel for its Engines

Fuel for Thought: Diesel Alternatives for the Non-Road Sector

Check out the Profit Matters channel. There is how-to information, articles and more to squeeze the most profit from your projects and improve your bottom line.
June 1, 2021
Diesel Engines