Perkins Engines Celebrates the Production of its 20 millionth Engine 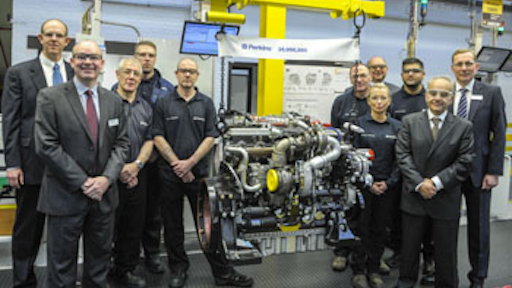 Perkins president Ramin Younessi, front right, joins representatives from across the business to celebrate the production of the 20 millionth Perkins engine.

Perkins celebrated a major milestone on April 28 with the production of its 20 millionth engine. Eighty-one years after the brand was established, the 20 millionth Perkins engine, a 1206 two-stage turbo Tier 4 diesel engine, rolled off the production line at the company’s facility in Peterborough, UK.

At a small ceremony, attended by around 70 employees, Perkins president Ramin Younessi said: “Twenty million engines is a significant achievement of which we’re all very proud. Today, Perkins is one of the world’s leading suppliers of off-highway diesel and gas engines in the industry. Our engines are manufactured across four continents and power more than 800 different applications in the construction, power generation, agricultural, material handling, industrial and marine markets.”

He continued, “Our global manufacturing facilities have all contributed to this 20 million milestone for the Perkins brand, to which I extend my sincere thanks to the team, while our global customer base have of course, made their contribution too, by continuing to value their ongoing relationships with us as their power provider, as much as we value our partnerships with them.”

The ultimate guide to maximizing productivity on and off the jobsite is here, and you don't want to miss it. Read our tips to be more efficient in your role with simple technology and processes through every stage of the construction project.
April 22, 2020

The company will now handle sales and service for the entire continent of North America including the United States, Canada and Mexico as well as the United States Territories including Puerto Rico and the U.S. Virgin Islands.
Hatz Diesel Of America, Inc.
February 11, 2019

With the example of the European Union’s more stringent Stage V diesel emissions limits, will the U.S. be satisfied with Tier 4 Final?
Nathan Medcalf
February 4, 2019
Follow Us