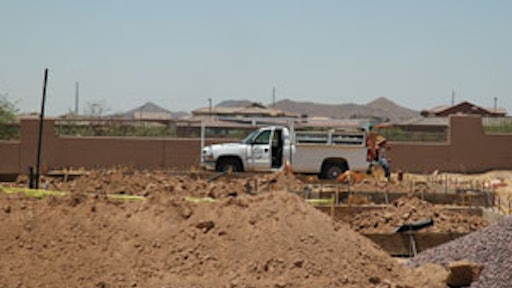 The price of diesel fuel in many regions of the country is outpacing the price of gasoline. This spread may widen as the 2007 on-road diesel emissions standards mandate the introduction of ultra-low sulfur diesel. In addition, the standards will require refined emissions reduction hardware, which could further increase the premium you currently pay for diesel engines.

As a result, you will need to pay more attention to powerplant choice when purchasing new pickups. "It really comes down to a fairly simple mathematical equation of up-front costs vs. the fuel economy difference," says Phil O'Connor, F-Series Super Duty marketing manager at Ford. Savings from the increased fuel economy of a diesel engine must pay for the difference in initial purchase price over the life cycle of the pickup.

The trick is defining the variables in the equation. "The challenge is that a contractor has to estimate the fuel economy difference between a gas and a diesel engine, based on prior experience or talking to other contractors who use the truck the same way they do," notes O'Connor. Next, you have to estimate future fuel prices. Finally, you need to factor in that diesels last longer than gas engines.

"This is what big fleets do all of the time when purchasing trucks," O'Connor points out.

Towing will impact engine choice. However, depending upon frequency and the loads being pulled, it might not be the deciding factor.

"A vehicle has to achieve certain levels of performance in order for it to be rated to tow," says O'Connor. "Certainly, power is one of the criteria. So if we rate a vehicle to be able to pull up to 7,000 or 8,000 lbs., it doesn't matter whether it is a gas or a diesel. That vehicle will accelerate up to a level that we deem acceptable with that load being towed."

In the past, gas engines were more responsive when the truck was operated unloaded, and they offered much quieter performance than their diesel counterparts. But this performance gap has narrowed.

In addition, the diesel offers more torque. "It is going to get any load up and moving a little bit easier," says O'Connor. It doesn't matter if it is a load near the truck's GVWR or a relatively light load.

Don't get confused by the horsepower and torque ratings when trying to pull heavy loads. Torque is the twisting force that determines how much load can be moved. "It is not a question of horsepower. It is a question of having enough low-end torque to accelerate the mass of the load and get it up to some reasonable cruising speed," explains Sam Winegarden, executive director of engine engineering, GM Powertrain. "A diesel, with all of that low-end torque, is just tailor-made for the application."

Consider the torque ratings of many of the gas engines available. "If you are looking at V10s and big V8s, eight liters and above, you are probably looking at peak torques around 450 ft.-lb.," says Winegarden. "A really stout one may get in the 475-ft.-lb. region, but none of them walk up anywhere near the 600 ft.-lb. kind of a number that the diesel gets."

Fuel efficiency is another piece of the equation. Even though the price per gallon of fuel may be more expensive, the diesel engine is more efficient and therefore goes farther on a gallon of fuel.

The thermal efficiencies of a diesel engine vs. a gasoline engine are at the heart of the fuel efficiency difference. "A diesel will run a compression ratio of 18:1, 19:1 or 20:1," explains Winegarden. "Across the industry, a typical gas engine will run 10:1. That difference translates into huge thermal efficiency gains. From a fuel economy perspective, it favors the diesel."

"You generally get better fuel economy with a diesel than you do with a gas engine," O'Connor agrees. "The difference depends on any number of different conditions - trailer weight, road conditions, altitude, etc."

The fuel efficiency difference is not as prevalent under light loads. "It isn't as big, but it will still favor the diesel because of the higher compression ratio," says Winegarden. "The difference is most dramatic under full load, which is really where the diesel shines."

"Because of the way the combustion system works, the diesel just has to have a lot of structure to it," says Winegarden. "That lets them go those long miles between rebuilds."

This increased durability is where much of the additional up front purchase price enters the picture. "Typically, a diesel is going to be a couple thousand more than a gas engine because of the robust design of the engine, the more expensive higher pressure fuel systems and the turbochargers," says Nick Richards, GM Powertrain.

"That content is what drives the difference," Winegarden agrees.

"Typically, the diesel will bring a higher resale value than a gas engine. The residuals are generally higher," adds O'Connor. "One of the reasons for that is the customers who buy diesel engines tend to hold onto their trucks. There are not as many coming back for auction."

A major factor in whether gas or diesel makes more sense is how long you plan to keep your trucks. With a diesel, the initial cost premium is generally a wise investment if you are able to take full advantage of the longer engine life.

A shift in balance

You must make a value judgment to determine if gas or diesel makes more sense in your particular application.

"If you are keeping it four or five years and hauling heavy loads close to GVWR on a regular basis, then you want to opt for the diesel," says Winegarden. "If you are not doing a lot of heavy hauling and you turn your trucks over every couple of years, the initial outlay becomes more important in the cost/benefit analysis. That might favor a gas engine."

However, the balance of the financial equation is changing. "If you isolate the commercial piece of the business, it has primarily been a gas engine business for a long time," says O'Connor. But the mix has begun to shift.

"Every year, diesel is getting a higher and higher mix of the commercial business. This is indicative of the fuel economy and longer engine life," O'Connor explains. "They are playing a larger role in the decision and we are seeing customers migrate to diesel. Gas still makes up a large percentage of this business, but diesel is increasing."

Lawson Const LLC is a Kirksville, MO-based rural water line and sewer line construction contractor that has experienced changing fleet demands as the company has grown. Lawson purchases diesel engines in its larger 1- and 2-ton trucks for the pulling power, but the pickups that are used to run around the jobsite are equipped with gasoline engines, according to Darrel Lawson, owner.

The average size of truck in the company's fleet has grown with the business. "We started out with 3/4-ton pickups when we went into business over 20 years ago and worked up to 1 tons and mainly 2 tons for our work trucks," says Lawson. "We only buy the 1/2- and 3/4-ton trucks for light transportation, and they are gas engines because of the extra cost of the diesel engines in the smaller trucks. The gas engines are just as reliable and very durable, as well as cost effective."

Lawson has experimented with diesel pickups. "In 1990 I tried to justify the cost of the diesel engine, but the truck wore out before it got to the savings milestone," says Lawson.

Consequently, Lawson recommends a gas engine for trucks used to run around the jobsite. "If you want to work the truck and haul a load, buy the diesel in a 2-ton," he adds.