Cut Down on Your SCR-related Equipment Costs 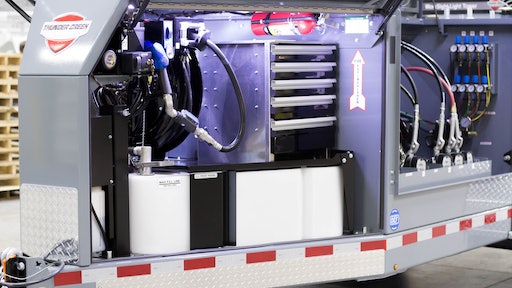 Thunder Creek Equipment’s closed diesel exhaust fluid (DEF) delivery system connects the DEF tank with the bulk DEF container through a closed coupler. On the jobsite, the coupler is replaced with a DEF nozzle for dispensing into the machine, ensuring minimal exposure to outside elements that can throw DEF out of compliance.

These SCR systems are well proven in on-road applications. But for the catalytic reaction to occur, a diesel exhaust fluid (DEF) must be sprayed over the precious metal substrate in the catalytic converter. DEF is 32.5% of a very pure synthetic grade of automotive-grade urea and 67.5% de-ionized water. For those who are not already familiar, urea is often used as a fertilizer in agricultural applications, though in a less pure form.

While SCR technology has proven benefits, customers need to be educated on these systems to prevent costly repairs and downtime. The biggest risk factor is from contaminated DEF.

Unfortunately, many customers are not properly educated since this is not a popular topic during the sales process. “If you are unhappy about the additional cost of this new excavator because of the cost of the emissions technology and you are a little sour because you have no other option, I am probably not going to have a great conversation with you about DEF handling,” explains Luke Van Wyk, Thunder Creek Equipment. “You are upset that you have to handle it in the first place.”

Yet, proper DEF handling is the key to trouble-free service. The catalyst is the most expensive component in an SCR system. “A catalyst cannot be repaired, it can only be replaced,” says Van Wyk. Any contamination in the DEF fluid can coat the precious metal in the catalyst, which cannot be reversed. “Any damage or degradation that happens there just happens.”

It is a cumulative effect. “Part of what gives owners a false sense of security is that the effects of metals contamination happen over a period of time, like an infection,” says Van Wyk. “We get a false sense of security because there is no immediate cause and effect relationship. That is why employing proper handling practices up front is so important. It is really a pay now or pay later type of risk. There are some very simple steps you can take to minimize or eliminate the risk you have from DEF purity.”

And this task does fall on your shoulders. Most OEMs clearly state they are not responsible for damage caused to the SCR catalyst due to contaminated DEF.

In the trucking industry, SCR technology has a proven track record of trouble-free service. But there are key differences between on-highway trucks and off-highway construction equipment that need careful consideration. The biggest difference is that on-highway trucks travel to the fluid source, usually a truck stop, while fluid is usually brought to a jobsite for construction equipment fleets — a considerably less sterile environment. This is where mishandling of DEF could potentially lead to costly repairs and unscheduled downtime.

Clean DEF is a Must

In order to prevent system degradation or failures, DEF must be kept free from contaminants. “The thresholds of contamination are very tight,” says Van Wyk. “The ISO standard defines the threshold for contamination in a measurement of milligrams per kilogram.

“Urea is incredibly corrosive,” he continues. “That is why we have to avoid all of the earth metals with urea.” Urea is corrosive to copper, chromium, zinc, iron, aluminum and magnesium to name a few. “We begin to get these materials in the DEF that urea is corrosive to.” The DEF itself becomes contaminated as the urea corrodes the metals. This contaminated DEF then passes through the catalyst in the SCR system. “As the DEF continues to pass through that catalyst, it will begin to create corrosion inside the catalyst.

“When you think about where these metals are found, think about how you normally handle fluids,” says Van Wyk. “You may use plastic containers. You may use metal containers, hoses or buckets. Most hoses have a fitting on the end. Those fittings are copper, chrome or nickel plated. Those are all known contaminants to DEF.”

It doesn’t take much exposure to any earth metal. “We have a customer now that had a fleet of machines. He built his own DEF tank on a service truck,” says Van Wyk. “He made the tank out of stainless steel, but he went to the local home and farm store and purchased fluid transfer components off the shelf. They were regular ball brass valves and a regular galvanized nozzle. He had a very significant breakdown in his fleet because all of those corrosives ended up in his catalyst.”

Even the transfer hose itself has the potential to become a contaminant. “In the industry, there is a special hose that is approved for DEF transfer because the materials used in the rubber of the hose and in the manufacturing process of the hose cannot introduce contaminants into the system,” says Van Wyk. “An ISO standard outlines materials that are okay, and there is a much longer list of those that are not.”

Don’t Treat DEF the Same as Other Fluids

A common mistake is to treat DEF like other fluids in your supply chain, such as diesel fuel, engine oil or hydraulic fluid. “In all actuality, the threshold for risk is much different,” says Van Wyk. “Anything that we do to contaminate or change the chemical makeup of that fluid inhibits its ability to make the chemical reaction properly and can harm the catalyst.”

For example, some technicians may have one funnel that they run all fluids through — engine oil, hydraulic oil, antifreeze. If you do the same with DEF, you will introduce whatever trace contaminants that were in the funnel into the DEF stream. As such, use of a separate funnel is a one of the necessary precautions.

A similar approach should be taken with jugs. “We were in a shop where a guy had grabbed whatever jugs he could find — the antifreeze jug, oil jugs, gas cans,” recalls Van Wyk. “He would take them down to the local truck stop where they had DEF at the dispenser and fill up the jugs. Everything that was natively in those jugs — the oil, the antifreeze — was now in his DEF supply chain.”

Thunder Creek Equipment advises using a sealed or closed loop system to further minimize the chance of contamination. “A sealed system is going to be a disposable container,” says Van Wyk. This includes 1- or 2 1/2-gal. jugs that are sealed at the factory and thrown away once used. “We implore people who want to handle DEF in smaller quantities to do that.” Never refill the container because it introduces a risk of contamination.

In larger fleets, using sealed containers is not practical. This is where closed systems come into play. “One of the common packages for DEF is a 275- or 325-gal. IBC container,” says Van Wyk. “It shuttles a plastic jug inside an aluminum cage. Those are a sealed system. There is no open access to the tank. You refill those through a Micro Matic coupler. It allows fluid to be transferred from container to container while that container remains a sealed, clean, sterile environment.”

Transferring bulk DEF from the large totes at the shop to the jobsite is where companies like Thunder Creek Equipment provide solutions. “There is a lot of attention given to a good quality of fluid in the original package and there is a demand by the equipment manufacturers for clean fluid to the machine,” says Van Wyk. “That is the world that we live in. You will want to use an intermediate system, similar to what we design, that can take the fluid through the supply chain using that Micro Matic coupler so it has a sealed path the whole way through.”

When filling the equipment in the field, take all necessary precautions to avoid dust contamination. If you suspect the dispensing nozzle has been contaminated, you can run a little DEF through it prior to dispensing since DEF is non-hazardous.

Also make sure you are dispensing in the appropriate tank. “There is a specific design diameter nozzle to try to reduce the risk of cross-contamination — someone putting a gasoline or diesel nozzle into the DEF tank,” says Van Wyk. “But we still hear stories of it happening.”

Don’t try to change the nature of DEF, which freezes at 12° F. SCR systems and DEF handling containers are designed to handle the freezing and thawing cycles. “In some cases, we see people try to use additives with DEF,” says Van Wyk. “They don’t like that it will freeze, particularly in the Northern climates. Some companies have come to the market with antifreeze for DEF that will lower its freezing temperature. But it has very bad effects and causes a lot of damage to the life of the catalyst.”

The key to trouble-free operation is education on the proper handling of DEF.

“As a fleet owner, I need to figure out how to protect myself so that the operator cannot unknowingly do something to harm my machine,” says Van Wyk. “We have to be very intentional about who we are educating. If I am a fleet owner, the risk is not as much about what I know about [DEF], but what the employee who puts fluid in my machine knows about it. That is where my real point of risk is.”

All About Diesel Exhaust Fluid (DEF)

For fastening and driving bolts and screws.
Metabo Corporation
April 9, 2019

Kit includes components to diagnose and repair both light and commercial vehicles and is suited for mixed fleets servicing a variety of vehicle sizes
MAHLE Aftermarket Inc.
October 16, 2017

Pirtek's cap and plug kits can assist with plugging or capping the ends on a hose or on the machine to eliminate any leakage/spillage during maintenance
PIRTEK
June 1, 2017

Geotab telematics will provide connectivity retrofits for 2011 and newer trucks so they can be monitored like trucks with Mack's GuardDog Connect telematics
Mack Trucks Inc.
March 16, 2017

The Renegade TMB 4000 Manual Parts Washer is designed for general repair cleaning as an alternative to washing parts with solvents
Renegade Parts Washers and Detergents
March 8, 2017