Fecon is working to adapt its proven mulching technology to harvest - rather than merely mulch - woody biomass on site. 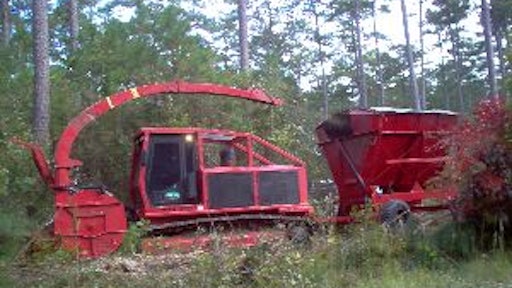 Lebanon, OH - As various states, and the country as a whole, seek to increase the percentage of electricity generated from renewable resources, biomass power generation is poised to provide more power to the grid. Up to now a stumbling block has been the short supply of clean green waste to burn.

One reason for the shortage is that operators using multi-person crews are effectively tethered to a leash a short distance from the co-gen facilities. But new technology aims to significantly increase that range, and allow a single operator to profitably process materials for co-generation or wood waste power plants.

Design engineers at Fecon, a forestry equipment manufacturer, are working to adapt the company's proven mulching technology to harvest - rather than merely mulch - the woody biomass that is cluttering much of the forested lands in North America.

Joe Roise, PhD, a professor at NC State University, proposed that harvesting woody debris for use in biomass power generation facilities would rid the forests of underbrush that threatens the ecosystem, as well as poses a fire hazard. The electricity generated would also be cleaner - dumping less CO2 into the atmosphere - while reducing our dependence on foreign oil. And unlike burning oil or coal, the woody debris is carbon neutral because plants are part of the atmospheric carbon cycle.

He approached Fecon, whose design engineers were already working towards such a solution. Since then, the two parties have worked together to build and test several variations of the Bio-Harvester technology.

Fecon currently makes a full line of mulchers used to clear rights-of-way for utilities, remove underbrush to mitigate forest fuels loading, and perform general land clearing for development and habitat restoration projects. Until now, the shredded material was left on the ground to serve as an erosion preventative, and add nutrients and organic matter back to the soil when the mulch decomposes.

With the Bio-Harvester, the rotor that contains the teeth to shred the woody materials is flipped so that it rotates backwards, discharging materials upward into an attached hopper. Previously, the design used the ground as an anvil to help tear woody materials apart. Now, the upwards rotation simplifies collection, but at a cost - smaller diameter materials are targeted.

When full, the hopper can be emptied into a waiting truck for transport to a co-generation facility. Materials are handled once - and by a single operator - making it simpler and more economical to harvest what was once waste material.

When the team designed and built the first prototype Bio-Harvester, they were striving to produce 10 tons per hour of shredded green waste that could be harvested by a single operator. The materials had to be of sufficient quality so they could be sold to co-generation facilities - that meant no dirt and a decent mix of materials (not too many fines but no large chunks either).

"The machine is designed for materials less than 8 inches in diameter at breast height," says Mark Ferguson, Fecon product manager. "It is designed to gather materials that are not practically harvested by any other method."

The development team figures that if the machinery is able to process the 10 tph of material, and do so at an average cost of $10 to $12 $/green ton, then the concept is commercially viable. These targets are built upon the assumption that co-gen facilities will pay $18-28 per ton for materials (the rates at time of initial testing).

The development efforts seem to be paying dividends in terms of production and operating costs. The initial testing in 2008 yielded rates of approximately 7.2 tons per acre. But after tweaking the collection and blower systems and making adjustments to shoe height and rotor speed, the second generation machine was achieving as much as 10-15 tph.

Productivity varies with conditions Of course, site conditions have an impact on production rates and operating costs. To see how the Bio-Harvester performs in all manner of environments, the development team ran it in a wide range of applications.

"One was a forest site where we were trying to get control of small-diameter woody biomass growth between the rows of a plantation," recalls Roise. "Another was in the wildland urban interface where we were clearing underbrush close to home sites. We also worked in a traditional development site, and in a brush-dominated ecosystem. Another was all woody brush - 20 feet high and densely packed together."

The highest production rates were achieved while performing pre-commercial thinning in a Louisiana pine timber plantation. The long rows allowed the machine to spend a maximum amount of time processing debris, while minimum time was devoted to maneuvering around obstacles.

However, operators - knowing they will sell the shredded product for $18-28 per ton - can typically live with lower productivity due to the maneuverability issues inherent when moving a large machine through the woods. Company officials said that under these circumstances, production may be closer to 8 tph.