Branching Out In Hard Times 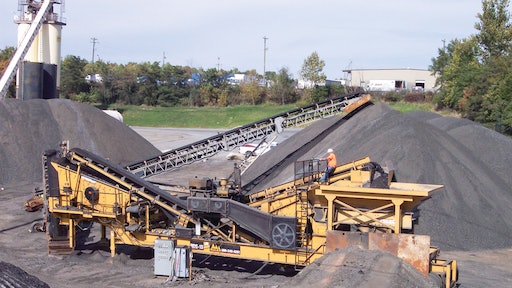 After the purchase of the RDS-15, Riverside was able to process recycled asphalt and concrete, two brand-new markets for the little Wallace company.

It takes strength to rise above recession. Deep dips in the economy can be the end of the road for businesses that aren’t prepared. But for those that plan ahead and adapt, it can mean a fresh start down a new path that makes the business even stronger than it was before.

Riverside Sand Company, a family-owned business out of Wallace, NC, is one company that, in the end, came out ahead.

For more than 25 years, Riverside specialized in processing sand and gravel for use in brick projects, playgrounds, golf courses and concrete pre-casting. The company also had a trucking division for delivering ordered materials to customers. It was the one thing that kept Riverside from being a one-channel company.

After a quarter of a century, the company had its trucking and sand and gravel operations down to a T. But Riverside Vice President Wade Norris knew such a narrow focus could be dangerous long term. He began looking into options for the next move.

Little did Norris know at the time, but the steps he took then to diversify would not only keep the company in business through the recession, but also would be the pivotal point in shaping Riverside’s future.

Norris researched new markets and machinery and saw an opportunity to expand into asphalt and concrete markets. His new business venture began when the owner of a North Carolina business shut his doors and put his equipment up for sale, including an 18-year-old IROCK RDS-15 closed-circuit plant, which incorporates both a screener and a crusher. Norris traveled to the business owner’s site to see the unit in action.

Riverside had been operating with a stationary impact crusher from a different manufacturer. While it appeared to be meeting his needs, Norris was just seeing a hint of the productivity the company had been missing out on. One look at the IROCK unit, and it was immediately clear the machine was efficient and had several features that would remarkably increase efficiency.

For example, after the initial round of screening, operators can set the machine to automatically return both decks of oversized material back to the crusher for additional sizing, whereas Riverside’s previous system required an extra person and an additional loader or excavator to pick up oversized materials and manually re-feed the crusher. While it might sound simple, this feature alone would help the business reduce expenses and boost production by as much as 20 percent.

He also saw that it would help Riverside branch out even further than he hoped and allow the company to perform contract work along the coast. With the portable unit, he and his team could essentially go where the work was, rather than wait for it to come to them.

This was possible because the crushing plant’s Rapid Deployment System (RDS) makes the unit exceptionally portable, not to mention quick and easy to set up – key benefits if the Riverside crew were to take the unit on the road.

Norris jumped at the chance to purchase the crushing plant. Overnight, Riverside was able to process recycled asphalt and concrete, two brand-new markets for the little Wallace company. On top of that, Riverside was able to offer its services on the go; with the RDS-15, it could provide customers on-site crushing services. It was ideal for companies that had several thousand tons of material that they wanted to keep but needed to crush.

The timing couldn’t have been any more perfect. Norris hadn’t predicted it, but he made the purchase just before the economy flipped, road improvement projects decreased and new construction slowed. On the other hand, the demand for reclaimed asphalt pavement (RAP) skyrocketed because the residual liquid asphalt within the material (usually 3-5 percent) makes the road building process more economical. In fact, because of a nationwide effort to stretch dollars and limit spending, the market saw a growth of 6.1 million tons in just one year, making a jump from 56 million tons in 2009 to 62.1 million tons in 2010.

Riverside quickly gained asphalt and concrete customers, and it wasn’t long before its customer base had grown exponentially. Very quickly, the company’s usual residential and commercial builders, asphalt manufacturers and landscapers were taking advantage of Riverside’s expanded offerings. In addition, by simple word of mouth among those in these industries, new customers learned of the new crushing company and began requesting products and services.

“We couldn’t continue to put all of our eggs in one basket. If we had kept relying strictly on sand and gravel, I don’t know that we would have survived,” Norris said. “But expanding our services to include crushing concrete and asphalt gave us another avenue of income when the sand business was down.”

So as the recession sank in, Norris and the Riverside crew watched other companies dissolve in the downturn as they continued production across a broadened market.

Buying the RDS-15 closed-circuit plant has made all the difference for both Riverside and its expanding customer base. The RDS-15’s return conveyor cuts out the associated operating expenses and labor costs. For example, in a 10-hour day, an employee earns about $200. Add the cost of running, fueling, repairing and maintaining an additional piece of equipment, which averages about $100 per hour, and the total is roughly $7,200 in a six-day workweek. The savings are substantial.

The RDS-15 took the lead role in asphalt production because the plant produces a consistent, cubical product sized to the necessary specs. For example, Riverside puts a 5/8-inch screen on the bottom and a 1-1/2-inch screen on top and sets the machine to return the top two conveyors to the impact crusher to size the material. The outcome is 100 percent 5/8-inch-minus material and a 20 percent increase in production, which equates to greater production in less time, lower labor costs, less fuel consumption and lower operating expenses.

Norris says asphalt has risen to the top of Riverside’s production list and now accounts for about 60 percent of the business. The company crushes an average of 950 tons of asphalt per day.

Seeing things were going well, Norris decided to take it one step further. The unit had worked well, but it had been in operation for nearly two decades. Norris had worked with the IROCK team on several occasions to ask questions and fulfill parts and service needs. He was always impressed with IROCK’s support, he said, so what came next was a natural progression.

Norris decided the used RDS-15 would be best as a backup crusher and screening plant and Riverside would further excel with a new crusher on the front lines. During one of his calls with IROCK, Norris discussed purchasing a new unit. Sure enough, just three months after he purchased the used machine, he and IROCK closed the deal on a new RDS-15.

However, rather than using the new RDS-15 on site as he suspected, the new unit became the company’s traveling machine and the intended standby crusher remained stationary at the Riverside site. Riverside has been running both crushers steadily ever since.

Riverside’s mobile crew and machine travel to sites within two hours of home base, where contractors have stockpiled anywhere from 20,000 to 35,000 tons of material for Riverside to crush and sort. Meanwhile, its customer base has become substantial enough to keep the traveling RDS-15 away from home year-round. The company travels through areas along the North Carolina coast and repeats the route each year.

The RDS-15’s closed-circuit design makes it ideal for the road. Because the machine incorporates both a screener and a crusher, there’s little need to purchase or haul a screener separately when the Riverside crew hits the road. Still, even though most traveling takes place near home, Norris still is asked whether hauling a crushing unit from site to site is a hassle.

“No, it’s not a hassle,” Norris says. “The bottom line is, this plant is the whole kit and caboodle on one chassis. We can drag it down the road, pull into a customer’s site and set up. We don’t have to haul the crusher with one truck and a screen with another. It’s all right there together.”

This traveling crew recognizes the importance of this, as the RDS unit is just a portion of the traveling operation. With all of the conveyors, excavators and other equipment, the crew has to transport a total of nine loads of equipment in and out of each job. One load fewer is something the team embraces, and the savings show.

Norris said he’s fortunate to have taken the plunge when he did, just when demand for asphalt was intensifying and the economy was taking a turn for the worst. The journey through diversification isn’t one that will end soon. Rather, taking a chance and looking for new, more profitable opportunities made for a more successful company overall. 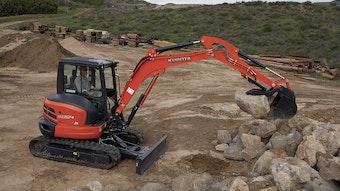 Kubota’s hydraulic thumb attachment greatly enhances the versatility of your Kubota excavator. It is excellent for manipulating, handling or loading irregular-shaped objects, debris, rocks and can even pick up items such as logs.
October 1, 2020
Latest

The K-JC 704 jaw crusher is small enough to fit inside a container for transport but strong enough to withstand the toughest of applications.
Komplet North America
January 21, 2020

The Komplet Kompatto 5030 mobile, self-propelled compact screener can function both as a tilted screen featuring two meshes for three selections or as a pre-screening machine to be used on the crushing operation’s output.
Komplet North America
January 21, 2020

Kolberg-Pioneer has added a two-deck, 4’ x 7’ pre-screen option to its FT4250 mobile impactor plant. The new option allows producers to scalp the feed, crush the material and post-screen all on one unit.
KPI-JCI - Astec Mobile Screens
November 13, 2019

Is it Time to Add Material Crushing to Your Asphalt Business?