INTERMAT 2012: Poised for Growth with 90% of Exhibit Space Sold

Positive growth forecasts and 90% of exhibit space sold eight months before the show are promising signs for INTERMAT 2012. 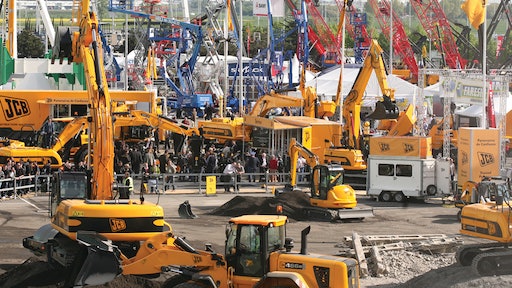 INTERMAT 2012 will feature a 375,000-sqm exhibition area and 20,000-sqm demonstration area featuring all types of products and services for the construction machinery and equipment sector.

PARIS, FRANCE - Positive growth forecasts and 90% of exhibit space sold eight months before the show are promising signs for INTERMAT 2012.

The international exhibition for equipment and techniques for construction and materials industries is held every three years, and it is scheduled to take place from April 16-21, 2012, at the Parc des Expositions de Paris-Nord Villepinte in Paris, France. The show features a 375,000 sqm exhibition area and 20,000 sqm demonstration area highlighting machinery and equipment manufacturers, components, equipment and accessories manufacturers, distributors, equipment rental firms, and service companies working for the construction and materials industries.

Innovation will also be be showcased at INTERMAT 2012 with the Innovation Awards. For the very first time, a European jury will be formed of users and construction and rental company representatives.

"Eight months before INTERMAT 2012, we have excellent participation rates. Industrialists are showing confidence in their sector, which is a good omen for a business-inducing show. Moreover, the market is up to scratch and booming, with a stable number of jobs, especially in France, where 15,000 people work in the construction materials industry and 1,500 jobs are created every year," says Maryvonne Lanoë, Exhibition Manager.

Worldwide growth in the construction machinery and equipment sector

The forecast for 2011, more favourable than for 2010, shows that the sector is recovering its dynamism, with growth anticipated to reach some 11%* this year. Emerging regions such as China, India and Latin America record sustained growth, stimulating the dynamics. These markets posted more than 10% growth, which very few European markets were able to boast for 2010. It now remains to be seen whether Europe will benefit from this good performance.

In the wake of the major crisis of 2009, the European construction equipment industry grew by some 18% in 2010. Nonetheless, the picture differs from one country to the next: Germany is in excellent shape with 19% growth and the United Kingdom recorded +57% development for 2010. Conversely, Spain sustained losses of 19% in turnover and Italy saw its construction sales stagnate throughout the year.

INTERMAT 2012 will be the key event of the year for all players in the construction industry, with: