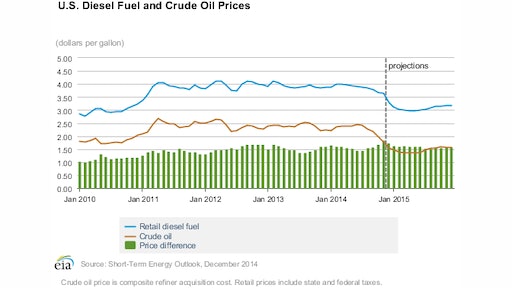 Regular diesel price per gallon in blue; crude oil per barrel in brown.

Monthly average prices for Brent crude oil have declined 29% from their 2014 high of $112/bbl in June to an average of $79/bbl in November, bringing gasoline and diesel prices down too. Most dramatically, U.S. weekly regular gasoline retail prices averaged $2.78/gal. on December 1, 2014, the lowest since October 4, 2010.

The U.S. Energy Information Administration's Short-Term Energy Outlook (STEO) projects that gasoline and diesel prices will continue to fall. The EIA forecasts regular gasoline retail prices to continue declining for the remainder of the year, averaging $2.61/gal. in December. EIA expects U.S. regular gasoline retail prices, which averaged $3.51/gal. in 2013, to average $3.37/gal. in 2014 and to fall another 23% to $2.60/gal. in 2015. Forecast retail gasoline prices for 2015 are $0.35/gal. lower than in last month's STEO.

Cat® Wheel Loaders are purpose-built and technology-equipped for your work. FIND YOUR LOADER
August 1, 2020
Latest

The key to lubrication PMs is to develop a standard approach to capturing, organizing and delivering information, a field often referred to as knowledge management.
AC Business Media
August 6, 2020
Follow Us