Issues with the complex roof already have delayed the opening twice, first pushing back the target from March 1 to June 1 and then pushing it back further to July 30, and appear to threaten another delay. 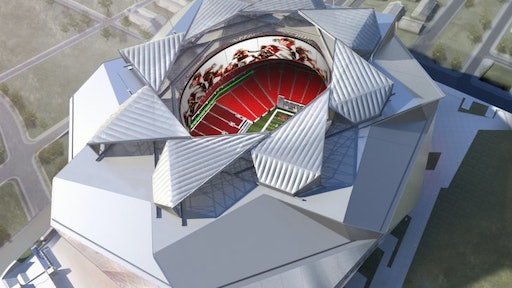 The Mercedes-Benz Stadium roof is the first of its kind, composed of eight separate petals opening in an estimated eight minutes.

Atlanta Falcons officials expect to have an update within seven to 10 days on the construction timeline for Mercedes-Benz Stadium — an update that should shed light on whether the retractable roof will be completed in time for the downtown stadium’s scheduled opening.

Issues with the complex roof already have delayed the opening twice, first pushing back the target from March 1 to June 1 and then pushing it back further to July 30, and appear to threaten another delay.

In a statement provided to The Atlanta Journal-Constitution, Steve Cannon, CEO of Falcons parent company AMB Group, said the organization hasn’t changed the July 30 opening date at this point but is “working through the construction timelines.”

“No announced event dates have been changed, and work is moving forward at a rapid pace,” Cannon said. “Many areas of the building are finished, and others are nearing completion. We are routinely working through the construction timelines with our partners, and with any building this size, scope and complexity, adjustments to construction timelines are expected.”

The possibility of further such “adjustments” raises many questions, including whether the Falcons could play in the stadium before the roof is operable or whether they might have to play elsewhere.

Read the full report at The Atlanta Journal-Constitution by clicking here.

Students can earn $2,000 towards their education to help them get started in the heavy equipment industry.
October 29, 2020
Equipment