US DOT Gives Green Light for I-5 Columbia River Crossing 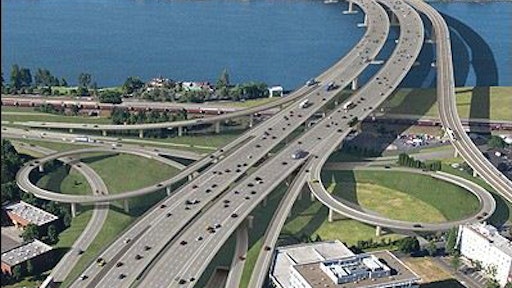 The approval – known as a “record of decision” (ROD) – represents the final clearance of the project's environmental review and allows Oregon and Washington to begin right-of-way acquisition and construction.

“This project is a great example of why we need to strengthen our infrastructure. The old facility is outdated and it no longer meets the needs of the traveling public or commerce in the region.” said Secretary LaHood. “It is one more instance of why the Obama Administration is focusing on key transportation investments to create jobs, strengthen the economy, and provide travelers with affordable, efficient options for reaching their destinations.”

The Columbia River Crossing project will replace the I-5 bridges over the Columbia River that connect Vancouver, Wash., to Portland, Ore. At a cost of approximately $3 billion for bridge, transit and highway improvements, the project is considered a long-term, comprehensive solution to address safety and congestion problems on five miles of I-5 from State Route 500 in Vancouver to Victory Boulevard in Portland and will be funded through a combination of state and federal sources. In addition, numerous improvements to bike/pedestrian facilities will accommodate the bridge’s 1,000 daily pedestrians and 5,000 daily bicyclists anticipated by 2030.

“This is a vital transportation improvement on one of the busiest interstates in the country,” Federal Highway Administrator Victor Mendez said. “The new bridge will put people to work and help support business and economic growth.”

“We are making the long-sought after rail transit link between Portland and Vancouver possible,” Federal Transit Administrator Peter Rogoff said. “This is the type of forward-leaning project that will greatly benefit the entire region well into the future.”

Freight congestion is one of the key reasons behind the bridge replacement project. I-5 is the most important freight freeway on the West Coast linking international, national and regional markets in Canada, Mexico and the Pacific Rim with destinations throughout the western United States. Freight volumes moved by truck to and from the area are projected to increase over the years, causing additional delays and cost to shippers. Currently, the bridge serves nearly 130,000 vehicles daily with travel demand expected to grow to 180,000 vehicles daily by 2030.

The nearly three-mile light rail portion of the project will extend from Portland’s Expo Center MAX station to Clark College in Vancouver. It is expected that the transit rail project will reduce the duration of daily congestion on I-5 near the Columbia River by 60 percent. By 2030, the light rail line is expected to carry more than 22,000 daily passengers.

The current I-5 crossing of the Columbia River consists of two side-by-side bridges. The bridge carrying northbound traffic was built in 1916, and the bridge carrying southbound traffic was built in 1958. Both bridges are inadequate to carry the current traffic volumes, and the mechanical lift spans that are raised to accommodate river traffic bring interstate traffic to a standstill. The geometry of the bridges makes the existing crossing one of the most unsafe highway locations on the I-5 corridor – its crash rate is double that of similar bridges. In addition, the bridge does not meet the current bridge design standards for earthquakes.