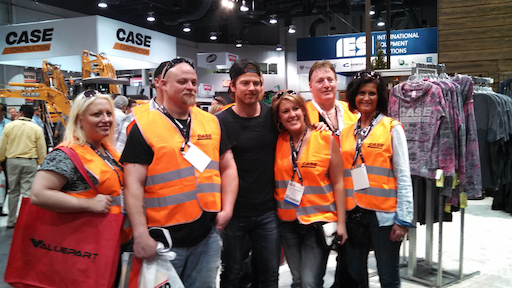 CASE Construction Equipment has partnered with country music star Kip Moore to participate in a number of customer engagement and community events throughout 2014. This includes exclusive appearances at CONEXPO-CON/AGG 2014, customer meet-and-greets at Moore tour stops throughout North America, and future events and initiatives aligned with both CASE’s Dire States infrastructure development program, as well as Moore’s passion for building up communities, including parks and educational infrastructure.

“Kip is an individual of strong character who shares CASE’s interest in giving back and investing in our communities,” says Jim Hasler, vice president, CASE Construction Equipment. “He’s much like the CASE brand – not flashy, but powerful. And you’ll be seeing a lot more from both of us. His music connects with our customers in a very honest way that reflects the reality of their daily lives and experiences. We look forward to working with Kip on our common interests.”

Born in Tifton, GA, Moore exploded onto the scene with his MCA Nashville debut UP ALL NIGHT, which became the best selling debut album from any solo male country artist released in 2012 and 2013, and produced three back-to-back number one singles with the PLATINUM-selling "Somethin' 'Bout A Truck," "Beer Money" and "Hey Pretty Girl." He nabbed a nomination for the Academy of Country Music's "New Artist of the Year" and just released the lead single, "Young Love," from his upcoming sophomore album. A constant road warrior, Moore is currently touring with Lady Antebellum amid headlining his own dates. For more information, visit www.kipmoore.net.

"The CASE Construction Equipment brand stands for the classic American work ethic," says Moore. "Not pretentious. Not afraid to roll up their sleeves and get in the trenches, to deliver what really matters to people. It's an honor for me to work with good people like that and especially those who give back to the community."

The ultimate guide to maximizing productivity on and off the jobsite is here, and you don't want to miss it. Read our tips to be more efficient in your role with simple technology and processes through every stage of the construction project.
April 22, 2020