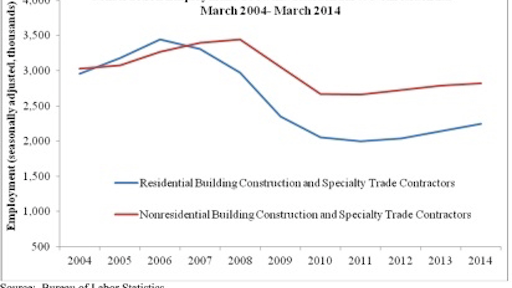 The residential sector continued to build momentum, adding 9,100 jobs for the month. Heavy and civil engineering added 3,200 jobs in March and has added 22,100 jobs in the past 12 months.

“The 6,700 nonresidential construction jobs added in March demonstrate the growth we expect in the second quarter of 2014,” said Associated Builders and Contractors Chief Economist Anirban Basu. “The colder than normal winter has been particularly cruel to the construction industry, and its departure should bring accelerated job growth.

According to the Bureau of Labor Statistics' household survey, the national unemployment rate remained unchanged in March at 6.7% as the country added a total of 192,000 jobs. January and February's jobs reports also were revised upward by a combined 37,000 jobs.

“Although the unemployment rate remained unchanged in March, the labor force (those either employed or seeking employment) increased by 1.5 million in the first quarter of 2014 after falling by 500,000 in 2013,” said Basu. “Gains to the labor force will, at least in the short term, apply upward pressure on the unemployment rate. That said, given the number of jobs created, upward revisions to prior months and expansion of the average workweek, today's jobs report should not be viewed as disappointing.”

Mecalac's AS1600 swing loader features the unique ability to pivot its bucket 90 degrees to either side.
Mecalac
July 15, 2020