37% of equipment-financing-company executives said they believe business conditions will improve in the next four months, up from 31.4% in March 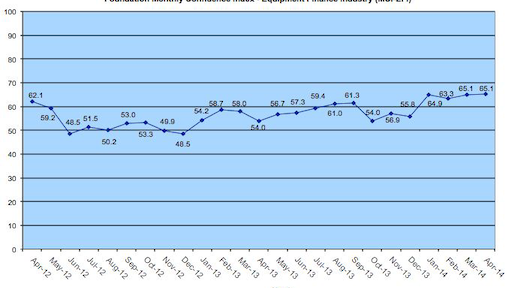 When asked about the future outlook, MCI survey respondent Thomas Jaschik, president of BB&T Equipment Finance, pointed out that new business activity in the first quarter of 2014 was positive, and the economy is growing.

"The conclusion of the winter of 2013-2014 may be the catalyst for pent-up demand to begin to be released," Jaschik said. "This will have a positive impact on the equipment finance market throughout 2014.”

Independent, Small Ticket
“I believe there are many projects that were put on hold during the last quarter due to the difficult weather conditions this winter. Equipment acquisition should improve as these projects get back on track as economic conditions continue to improve and the weather turns more favorable.  The concerns I have are for the increasing amount of capital that continues to enter the marketplace bringing a downward pressure on yields.” Valerie Hayes Jester, President, Brandywine Capital Associates, Inc.

Bank, Small Ticket
“It seems that the U.S. consumer is gaining confidence, which may translate into increased spending.  When this segment of our economy actually gains real traction, we will see tangible growth in GDP.  The one caveat is the threat of a global event that could stall our cyclical recovery.”  Paul Menzel, President & CEO, Financial Pacific Leasing, LLC