Equipment Finance Industry Picking Back Up After Winter Slowdown 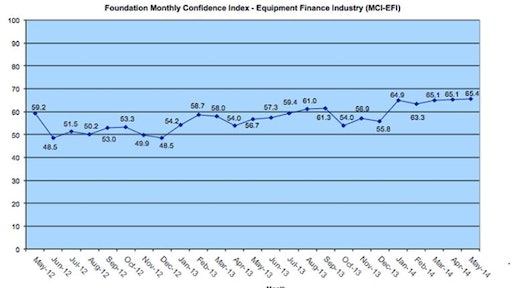 The May 2014 Monthly Confidence Index for the Equipment Finance Industry showed confidence in the equipment finance market is 65.4, relatively unchanged from 65.1 last month, peaking at the highest index level in two years for the third consecutive month.

The Equipment Leasing & Finance Foundation (the Foundation) releases the May 2014 Monthly Confidence Index for the Equipment Finance Industry (MCI-EFI) which showed confidence in the equipment finance market is 65.4, relatively unchanged from 65.1 last month, peaking at the highest index level in two years for the third consecutive month.

“We have experienced a transaction flow that appears to be returning to a more normal state after the winter slowdown," said Valerie Hayes Jester, President, Brandywine Capital Associates, Inc. "Companies seem to be getting back on track and ordering equipment that should have been delivered in the first quarter. I am still concerned with the longer term effects of the many changes in our healthcare system as well as still undetermined tax policies that have great impact on small businesses.”

Designed to collect leadership data, the index reports a qualitative assessment of both the prevailing business conditions and expectations for the future as reported by key executives from the $827 billion equipment finance sector.

Eighty-eight construction oriented trade groups have signed a joint letter to Congress urging a one-year extension of the FAST Act; plus more on the September 17, 2020, edition of Construction News Tracker.
Caterpillar - Cat
September 17, 2020
Follow Us