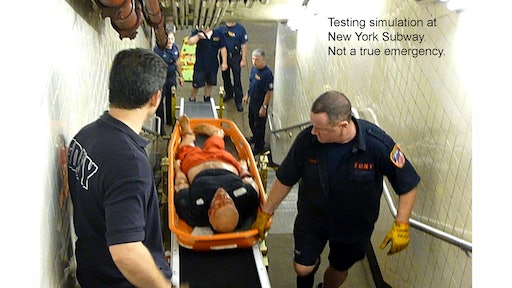 Access Construction Equipment, manufacturer of the portable, rugged conveyor Miniconveyor, is pleased to announce its partnership with The New York Fire Department and the development of a Unique Disaster Preparedness System.

The New York Fire Department contracted with Access Construction Equipment to custom design a complete disaster recovery system to efficiently and quickly move victims to safety in emergency situations. The custom-designed trailer contains a complete set of specially built Miniconveyor portable conveyor units and all of the accessories needed to quickly move in, set up and efficiently run a recovery effort.

Testing was done using rescue drag mannequins to realistically simulate moving to street level severely injured citizens from Grand Central Station and Penn Station in New York City. These particular stations were chosen to determine the effectiveness of the conveyor system used in conjunction with the conventional “firefighter’s carry” to exit numerous flights of stairs at steep inclines. Access Construction's conveyor system proved beneficial in expediting safe egress, reducing the time for the New York Fire Department to complete the evacuation portion of the rescue and enable firefighters to move to the next step in the rescue effort.

“We are honored to partner with the New York Fire Department for this very important pilot project” said Larry Leach, president of Access Construction Equipment. “To have the foresight and to implement a disaster recovery program system certainly proves that the New York Fire Department, along with the City of New York, takes very seriously the task of ensuring the safety of the citizens of and visitors to New York. They have taken great initiative to have a system that is in place and ready to serve the people.”

The Miniconveyor system will be beneficial to New York in a variety of dangerous, emergency situations. Access Construction Equipment uses the latest advanced technologies to manufacture a system that is lightweight for portability and tough enough to comply with even the New York Fire Department’s tough standards. This disaster recovery conveyor system was designed for and tested in New York’s subway system and also has the versatility to partner with rescue workers in any extraction situation. The portable system has proven effective in all disaster recovery applications. Whether an emergency situation requires removing rubble and debris to reach a target or moving the injured victims themselves to safety, the Miniconveyor will aid disaster recovery teams by expediting their work thereby saving lives.