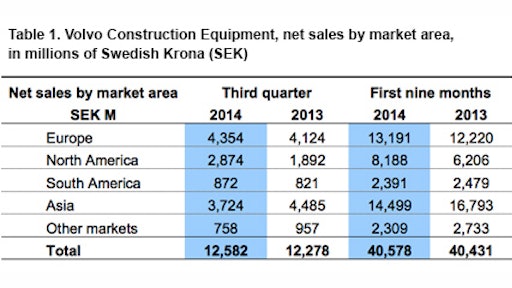 Volvo CE saw stable market growth in North America dented by a faster decline in China and a loss of momentum in Europe in its third quarter results – while earnings rose strongly in the period, thanks to effective cost control measures and currency tailwinds.

A solid 9 percent improvement in the North American market was not enough to overcome uncertainty and negative growth elsewhere in Volvo Construction Equipment’s (Volvo CE) third quarter results, which saw revenues rise 2 percent in the period. Earning rose at a much greater rate, however – up 31 percent – thanks to beneficial currency effects, improvement activities and the company’s actions to partly mitigate negative factors it faces in some markets.

Net sales in the three months of July-September increased to SEK 12,582 M (12,278 M). However, when adjusted for currency movements, net sales were down by 3 percent during the period. Offsetting continued solid growth in North America, sales during the quarter were weighted down by a loss of momentum in Europe and an accelerated negative growth in China.

Despite largely flat sales in the period, operating income and operating margin both improved, to SEK 648 M (496 M) and 5.1 percent (4 percent) respectively. Earnings were positively impacted by favorable currency movements, to the value of SEK 125 M, compared to the third quarter of 2013. Earnings were, however, reined back by lower capacity utilization in the industrial system – and to address this further cost saving initiatives will be introduced to right-size the cost structure.

“Good momentum in North America was offset by a loss of impetus in Europe and accelerated negative development in the Chinese construction equipment market. We expect demand in China to continue down for the rest of the year and into 2015. To react to this market scenario our focus is on adapting production to ensure a balance between demand and supply, and continuing to execute on our efficiency and cost saving program – while at the same time defending prices and gaining market share,” said Volvo CE president Martin Weissburg.

How did John Deere improve on its E-Series Articulated Dump Trucks (ADTs)? They simplified. They took powerful, productive, and popular ADTs and made them even more comfortable and easy to use with the introduction of the new E-II Series.
February 1, 2021
Latest