Enter for free monthly to win a Miller welder each month in 2012 and a shot at three grand prizes, including a custom chopper 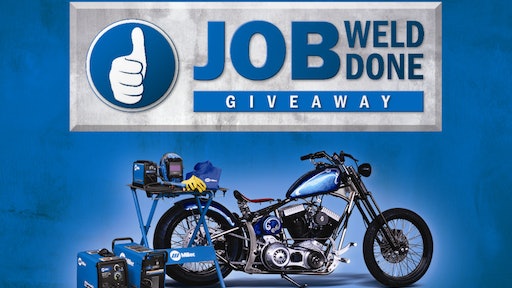 Miller Electric Mfg. Co. today announced the launch of the Job Weld Done Giveaway, offering customers a chance to win premium Miller product every month for nine months beginning April 16, 2012. Three individual grand prize packages will also be awarded in January 2013, including a custom-built EPIC chopper, NASCAR trip to Bristol, Tenn., and a trip to Las Vegas including an inside look at the SEMA Show.

In addition, 10 winners will be awarded a Miller t-shirt during each monthly entry period.

There will be one winner selected for each of the following three grand prize packages:

My Miller Milestone giveaway gives welders a chance to win a personalized 90th-anniversary Miller machine and helmet for themselves and another set for a friend
Miller Electric Mfg. Co.
September 24, 2019