Fortune ranks Fluor highest at No. 124, with $23.4 billion in revenues, followed by Jacobs and Kiewit 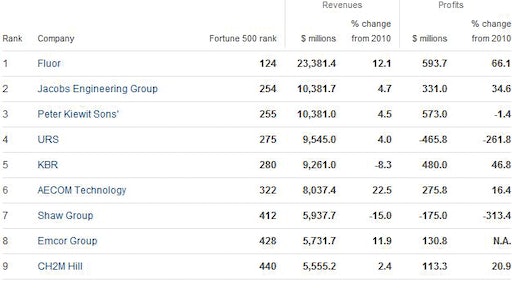 Only two of the nine firms in the 2012 Fortune 500 engineering and construction industry segment showed revenue declines in 2011. Eight of the same nine contractors reported falling revenue in 2011.

AECOM Technology climbed 31 places on Fortune magazine's list to No. 322 with a dramatic 22.5% increase in revenues.

In 2011, when the same nine contractors made the Fortune 500, eight of the firms had reported declining revenue for the year. This year only two contractors, Shaw Group and KBR, showed less revenue than 2011.