In a conversation with Punchbowl News sponsored by the Association of Equipment Manufacturers, Pete Buttigieg said Congress will be very busy in the coming days working on the American Jobs Plan 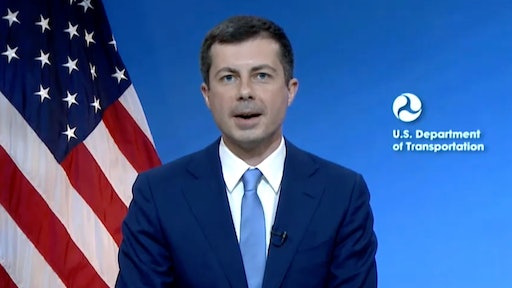 The once in a lifetime investment in infrastructure proposed by President Biden is drawing a lot of attention in the news, but little action has happened so far to actually get the plan moving.

U.S. Transportation Secretary Pete Buttigieg has been busy showing strong support for the plan while Republicans like the Senate minority leader Mitch McConnell, stand poised to fight the bill “every step of the way.”

Once seen as a promising area of bipartisan compromise, the American Jobs Plan as proposed is unlikely to sail through this Congress with widespread support from either side. And the success of the plan depends largely on Congress coming to agreements on the details which has been hard to come by as of late.

Still the President has said inaction on this proposal is not at option and continues to push leaders in Washington to get something done before Memorial Day, just short weeks from now.

"We need to do something real, we need to do something big," Buttigieg said during a live news event from the Association of Equipment Manufacturers and Punchbowl News. "There's at least a trillion dollar backlog of work do be done. We can't build back to what we had. We have to build it back better and sometimes that means building it differently. We want to look back on this the way we look back on what Eisenhower did for the economy and the life of our country."

Buttigieg had a lot to say during the short 30-minute conversation:

"This hits home for me. We could be doing more and we will be under the president's plan to make sure we are supporting manufacturing in the United States."

"There's no question that there will be more electric vehicles built in the future but the question is 'will EVs of the future be built on American soil?'," Buttigieg said. "We need to invest in our workforce and the manufacturing sector. We need to look at our supply chains and how it limits U.S. manufacturing. We need to strengthen our domestic capabilities."

"We need to break the false choice of climate vs. jobs. It can create millions of good paying jobs. The theme of this package is infrastructure but the point of it is jobs."

Stay tuned to ForConstructionPros.com as negations continue and plans are unveiled.