October US Housing Starts Bounce Back after Storms 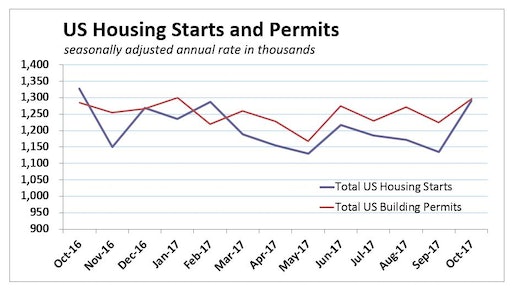 Total housing starts leaped 13.7% in October to a 1.29-million seasonally adjusted annual rate, lifted by solid 5.3% growth in single-family starts and a 37.4% spike in the multifamily sector.

Single-family permits, a reasonable indicator of future construction conditions, are running 10% higher year to date than the first ten months of 2016. Part of the gain for single-family construction in October was a rebound in Florida and Texas after project delays in September. Single-family starts in the South were up 17% compared to September.

The multifamily rebound follows a soft September reading. A more stable three-month moving average shows multifamily development continuing to the leveling off process begun in 2015. Multifamily starts are down 9.9% year to date.