Like manufacturing, the U.S. construction industry is becoming more reliant on capital and technology 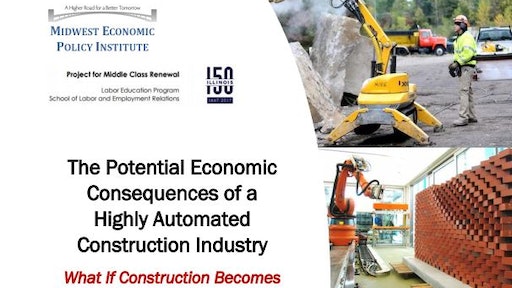 Increasing automation in the construction industry could displace or replace as much as 49% of America’s blue-collar construction workforce (2.7 million workers) and eliminate nearly 500,000 non-construction jobs by 2057, according to "The Potential Consequences of a Highly Automated Construction Industry", a new study by the Midwest Economic Policy Institute (MEPI) and the Project for Middle Class Renewal at the University of Illinois at Urbana-Champaign.

“Advancements in technology have already dramatically re-shaped American manufacturing and eliminated millions of blue-collar, middle-class jobs,” said study co-author and Project for Middle Class Renewal Director, Dr. Robert Bruno. “Similar changes are already underway in the construction sector, and it is vital for policymakers to begin thinking about ways to embrace progress without leaving middle-class workers behind.”

To conduct their thought experiment, MEPI and U of I researchers highlight a decades-long decline of blue-collar labor as a total share of construction costs and the growing share of capital — which includes machinery, equipment, and other technologies— to show that the industry is well positioned to move towards increased automation.

“Whether through the use of robotics, virtual reality, or other technological innovations, automation has been increasing productivity, reducing costs, and improving quality,” said study co-author Jill Manzo. “With capital growing, the industry struggling with skilled labor shortages, and our nation facing growing infrastructure needs, it is fair to conclude that the pace of automation is likely to accelerate in the decades to come.”

Utilizing U.S. Bureau of Labor Statistics employment projections, as well as recent McKinsey & Company estimates which identified the percentage of tasks that could potentially be automated across a broad range of occupational categories, MEPI and U of I researchers identified the potential risk of automation in ten distinct skilled trades by 2057 — both nationally and in the Midwestern states of Illinois, Indiana, Iowa, Wisconsin and Minnesota. They found that not only could 49% of skilled middle-class construction jobs ultimately be automated, but that roughly 90% of operating engineers, cement masons, and painters could be displaced.

Beyond the effects on jobs in specific blue-collar construction occupations, the study also assesses how automation might impact the wages and benefits of displaced workers who find other jobs and the economy as a whole. It notes that between 2010 and 2017, 2.6 million workers who moved from construction into other jobs saw their wages drop an average of 32%.

Using industry standard IMPLAN modeling, it concludes that if this pattern held for all blue-collar construction workers potentially at risk of being displaced by automation by 2057, it would mean an annual loss of $41 billion in labor income (in today’s dollars) and the elimination of as many as 500,000 non-construction jobs.

“While many construction workers affected by automation would no doubt find other employment opportunities, the experience of hundreds of thousands of recently displaced construction workers suggests that they could face a substantial pay cut,” added MEPI Policy Director Frank Manzo IV. “Lower labor income for these workers results in lower levels of consumer spending, which translates to lower economic output and job losses across other sectors of the economy.”

To address the challenges posed by future automation of the construction industry, MEPI and U of I researchers propose a set of policy recommendations aimed at ensuring new workers are trained to meet the industry’s future labor force needs, and to help re-train current workers who could be displaced in the future. These recommendations range from expanding skilled trade apprenticeship programs and partnering with universities to expand access to post-secondary education, to taxing capital in order to fund re-training programs for displaced workers.

“It is most likely a question of when — not if — blue-collar construction workers will face impacts from increasing automation of the construction industry,” concluded Dr. Bruno. “To prevent the technological changes from inflicting economic damage on our once-thriving middle class, now is the time to promote policies that invest in the training programs that can prepare workers for the jobs of the future.”