Nonresidential Buildings Starts Down for First Half of 2018 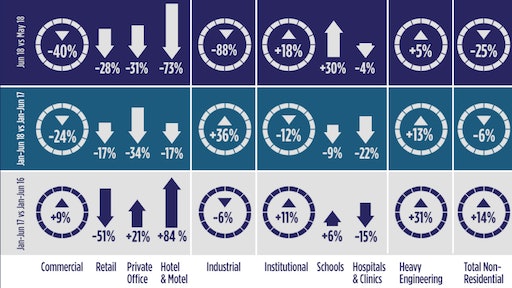 ConstructConnect
ConstructConnect announced today that June’s volume of construction starts, excluding residential activity, was $39.8 billion — a month-to-month change of -24.7%. The one-quarter drop was not due to market conditions. Rather, the comparison of June versus May suffered from the latter including Foxconn Technology’s $10 billion industrial plant in Wisconsin. June relative to May exclusive of that single mega project was still down, but by only -7.2%. The historical May-to-June change, aided by favorable ‘seasonality’, has been +4.5%.

Nonresidential building plus engineering/civil work accounts for a larger share of total construction than residential activity. The former’s combined proportion of total put-in-place construction in the Census Bureau’s April report was 57%; the latter’s share was 43%.

June 2018’s increase in construction employment, as recorded in the latest Employment Situation report from the Bureau of Labor Statistics (BLS), was 13,000 jobs. Among sub-sectors of construction, it was heavy and civil engineering work that saw the largest month-to-month pickup in hiring, 6,000 jobs. The average monthly climb in staffing by the construction sector through H1 of this year has been 25,000, a decent gain (+25%) over last year’s comparable figure of 20,000.

Construction jobs are now +4.1% year over year, a rate of improvement that is more than two-and-a-half times greater than the +1.6% advance for all jobs in the nation. The BLS report also includes employment results for the following additional pockets of the economy with close ties to construction:

Most of the -24.7% retreat in total nonresidential starts month to month (m/m) in June originated in the industrial subcategory (-87.7%). There were no projects in June’s manufacturing starts that could compete with May’s $10 billion Foxconn insertion. Commercial (-40.4%) was also down, but institutional (+18.0%) and engineering (+4.5%) perked up.

Miscellaneous commercial in June, however, did manage to deliver some good news. While being -42.6% ytd, it was +23.8% y/y and +92.7% m/m. This category includes transportation terminal work, which was +60.9% ytd. The passenger side of airport construction appears here, with runways in civil. Nashville has been the latest city with large airport terminal work.

Medical facility work has a large supporting role in institutional starts. Hospital/clinic, nursing/assisted living and miscellaneous medical combined for a 28% share of institutional in June. The biggest of those three, hospital/clinic, was -4.1% m/m; -8.5% y/y; and -22.2% ytd.