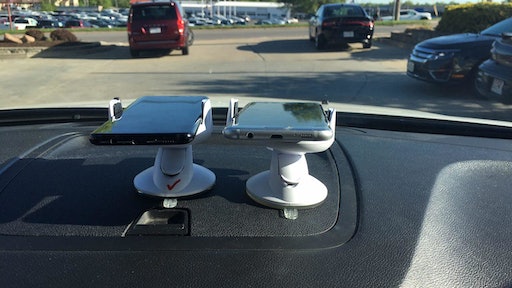 In the U.S., aging civil infrastructure systems are deteriorating on a massive scale. A recent report by the American Society of Civil Engineers gave these systems a D+ rating nationwide on an A – F scale. Now scientists at the University of Missouri (MU) have developed smartphone-based technologies that can monitor civil infrastructure systems such as crumbing roads and aging bridges, potentially saving millions of lives.

By using various sensors on smartphones such as a gyroscope, an accelerometer to measure speed, and camera, or tiny external sensors such as an infrared sensor, scientists can determine the specific makeup and deterioration of a road’s surface in real time. However, scientists won’t be collecting all of the data. Once the sensor is plugged into a smartphone, any person will be able to effortlessly transmit the data wirelessly to a database while riding on a road. Researchers hope the large amount of data collected by crowdsourcing this technology will allow for better informed decisions about the health of roads and bridges.

“Many of the existing methods to monitor our civil infrastructure systems have technical issues and are not user-centered,” said Amir Alavi, an assistant professor of civil and environmental engineering in the MU College of Engineering, with a courtesy appointment in the Department of Biomedical, Biological and Chemical Engineering. “People are looking for smart, cost-effective, scalable and user-centered approaches. With current advances in technology, people can help monitor or detect problems using their own devices, and smartphone technology allows us to do that with civil infrastructure.”

Alavi partnered with Bill Buttlar, the Glen Barton Chair of Flexible Pavement Technology, to develop this innovative solution to monitor roads and bridges.

“Assessing roads, bridges and airfields with affordable sensors, such as those found in smartphones, really works,” Buttlar said. “With a smartphone, we can stitch together many inexpensive measurements to accurately assess things like the roughness or deterioration of a road surface. In a recent project sponsored by the Missouri Department of Transportation, we also showed that it can accurately assess the condition of airport runways and taxiways.”

The study, “An overview of smartphone technology for citizen-centered, real-time and scalable civil infrastructure monitoring,” was published in Future Generation Computer Systems. Funding for this study was provided by the Missouri Department of Transportation. The content is solely the responsibility of the authors and does not necessarily represent the official views of the funding agencies.