Saiid Saiidi honored for his work with the Washington State DOT in the design, specification preparation and implementation of his technology as part of the State Route 99 Off Ramp Bridge in Seattle 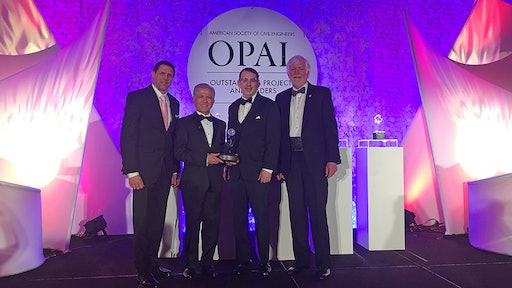 Representatives of the State Route 99 project receiving the trophy at the ASCE Gala include, from the left: Brian Nielson, Alaska Way Project Manager from WashDOT; Saiid Saiidi of the University of Nevada, Reno; Jed Bingle, the design engineer for SR-99 (Formerly at WashDOT); and Roger Millar, the Washington State Secretary of Transportation.

Saiid Saiidi has pioneered, and revolutionized, bridge construction – specifically with the use of innovative materials – to not only make bridges safer, but to make them usable after a major earthquake. For this, the civil engineering professor at the University of Nevada, Reno has been honored by the American Society of Civil Engineers for his work with the Washington State Department of Transportation in the design, specification preparation and implementation of his technology as part of their State Route 99 Off Ramp Bridge in Seattle, Washington.

The technology, using shape memory alloy materials of Nickel Titanium and custom composites concrete, allows the bridge columns to bend in an earthquake and then return to its original position. It’s the first time this technology has been applied anywhere in the world.

Coming to the south portal: A “flexible bridge” to stand up to Seattle’s next big earthquake

Saiidi’s project is one of five finalists recognized as the Top Outstanding Civil Engineering Achievements for 2018. He attended the annual OPAL (Outstanding Projects and Leaders) ceremony March 14, where the project was highlighted and the team received its trophy. The OPAL Awards Gala is civil engineering’s premier event, gathering the profession’s most esteemed leaders for one night to honor remarkable projects and individuals who have made monumental contributions to the profession and ASCE’s mission of a sustainable infrastructure worldwide.

“For this project to be selected as a top candidate is indeed a great honor because the competitors are usually civil engineering mega projects of extraordinary magnitude and design from all around the world,” Saiidi said. “The SR-99 Off-Ramp bridge looks ordinary. What made it stand out is the SMA (shape memory alloys) and another innovative concrete that we used in the bridge.”

His past research on shape memory alloys, including a $2 million grant from the National Science Foundation, led to a grant from the Federal Highway Administration and the State of Washington to do new research specific to a three-span bridge in downtown Seattle to implement the technology he developed. This was done and the bridge was constructed and is now in use.

“This is a major competitive recognition based on innovation, one of the basic principles of research of the College,” Manos Maragakis, dean of the College of Engineering said. “It is a clear evidence of the quality, impact and competitiveness of Saiid’s research and the program of Earthquake Engineering. I am very proud of this accomplishment.”

In his 40-year career, Saiidi has been working on this technology for 20 years, building and destroying as many as a dozen large-scale bridges and columns in the University of Nevada, Reno’s world renowned Earthquake Engineering Laboratory. In the experiments, the 50-ton, 110-foot-long bridges are built atop the lab’s several hydraulically driven shake tables that measure 14-by-14 feet and can simulate any recorded earthquake.

The scaled sized bridge models allow him to test various innovative materials, compare them to standard construction and show the success of the innovations.

The technical focus of his studies are on several quarter- to third-scale test models of a series of two- to four-span bridge frames supported on three biaxial shake tables at the University. Models tested include a conventional bridge in February 2007, a bridge with advanced materials in December 2008, a fiber-reinforced polymer composite bridge from April to June 2010, and the Accelerated Bridge Construction models that included the specialized columns in 2015, 2017 and 2018.

“It’s been fascinating watching Saiid’s work over the years, building, then bending and breaking concrete bridges and support columns – making them stronger along the way,” University of Nevada, Reno President Marc Johnson said. “He exemplifies the dedication and drive of our faculty that recently helped bring us to an R-1 very high research classification by the Carnegie Foundation.”

Projects have been on earthquake engineering of structures, including the large-scale model studies, retrofit method and repair development, design method development and advanced material adaptation in structural engineering.

“Education is one of the most rewarding careers one can choose, and I am very pleased to have educated others and myself for more than 40 years,” Saiidi said. “Research is a prominent component of higher education.”

Earlier this year the innovative columns project was selected by the Seattle Section of the American Society of Civil Engineers for the outstanding civil engineering achievement award and Saiidi and his team published a journal paper earlier this year about the bridge, which was selected for the Lyman Award given at the Precast Concrete Institute ceremony in October 2018.