Purple Line Transit Partners dispute $800M in cost overruns and the Maryland Transit Admin. is looking for contractors to finish the half-done $5.6B transit line 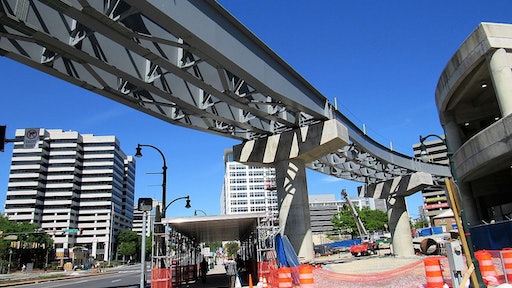 The joint venture building the Baltimore-area’s Purple Line – concessionaire/proposer Fluor Corp., Lane Construction, and Traylor Bros. – members of one of the largest ever public-private partnerships, spent last week buttoning up unfinished project sites where work has stopped. The Washington Post reports that Maryland officials said the joint venture Purple Line Transit Partners is preparing to quit the light-rail project amid disputes with the state over what the contractor says is $800 million in delay-related cost overruns.

Officials with the Maryland Transit Administration testified in a lawsuit the agency lost earlier this month that the agency would have to divert funding from MARC commuter rail and other state transit services to complete the Purple Line. The dcist.com reports the final ruling allowed the constructors to quit the $5.6 billion, 36-year public-private partnership over the cost disputes.

The state owns the project, but PLTP, the private half of the partnership, was set to operate and maintain the line for 30 years.

The 16-mile light-rail line connecting New Carrollton to Bethesda in Maryland’s Montgomery and Prince George’s counties also would be delayed by at least a year and perhaps two if the state has to take it over or find a new concessionaire, officials said.

Construction is about half complete. These developments could add one or two years of delay to the already-late project. That could push the opening into 2026. It was originally scheduled to open in March 2022.

Maryland transit officials have said they will complete the project.

MarylandMatters.org reports Maryland Transit Administrator Kevin Quinn said the agency is still “evaluating” whether to keep the project in-house or hire a firm to take over for PLTP. “It’s a little too early to speculate and we’re looking at about a 4-to-6 month period to evaluate that. What I can say is there are a number of good contractors in this market who want to take on this work.”

Fluor's Out, Purple-Line Partners Settle Claims with Maryland for $250M and Terminate Litigation