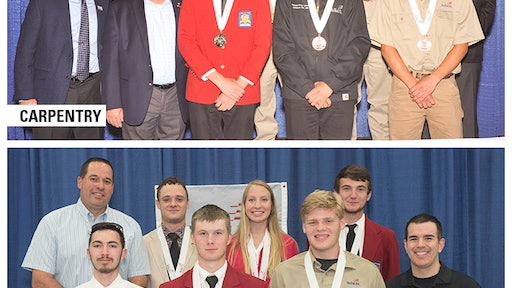 NCCER is proud to recognize the winners of this year’s SkillsUSA national carpentry and masonry competitions. The winners were announced on June 29 at the 54th annual SkillsUSA National Leadership and Skills Conference in Louisville, Kentucky.

More than 6,500 outstanding career and technical education (CTE) students competed in 102 different craft, technical and leadership fields. The competitions were part of the SkillsUSA Championships, which is the national-level competition for secondary and postsecondary students enrolled in CTE programs. Students not only test their knowledge and skills against industry standards, but are given the opportunity to compete against peers in their craft.

NCCER is proud to congratulate the winners from both contests. This year’s carpentry competition featured 71 secondary and postsecondary competitors. The high school medalists were:

Additionally, 54 masonry competitors challenged their skills this year. The high school medalists were:

Winners of both competitions were decided based on the combined results of a written exam and evaluation of the competition project by a panel of journey-level judges. The contests are planned by technical committees made up of industry representatives to test the skills needed for successful entry level performance as a carpenter or mason. Due to their tremendous importance, safety practices and procedures were also judged as a component of each contestant’s overall score.

NCCER would like to thank the following organizations for their generous financial support and prize donations for this year’s carpentry competition:

NCCER would like to thank the following organizations for their generous financial support and prize donations for this year’s masonry competition: