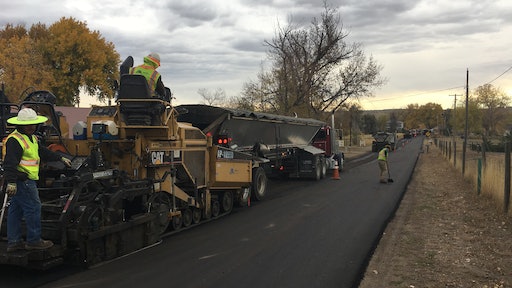 The 2019 Larry H. Lemon Quality in Construction Award recognized Martin Marietta, Lakewood, CO, for its work involving more than 40,000 sq. yds. of milling and 4400 tons of paving on West Belleview Avenue, the dividing street between Colorado cities Lakewood and Denver.

Martin Marietta, Lakewood, CO, had produced and worked with both warm mix asphalt and stone matrix asphalt before, but last year for the first time they combined the two on two road paving projects where half of the road was owned by Lakewood and half by Denver.

Martin Marietta bid the job for each city separately, but when they were awarded both contracts they decided to combine the work and complete them as one job, according to Andrew Chaulk, project manager, Martin Marietta. The contractor milled 40,000 sq. yds 1 ½ in. thick of pavement and constructed a 2-in. overlay using 4400 tons of hot mix asphalt.

“We looked at them as two separate projects and bid them accordingly,” says Andrew Chaulk, project manager at Martin Marietta. “Once we were awarded both contracts, we treated them as one job. It was a straightforward operation. A pretty standard job that went really well.”

The resulting work, which received a smoothness bonus, was named one of the 10 recipients of the National Asphalt Pavement Association’s 2019 Larry H. Lemon Quality in Construction Award for excellence in construction of an asphalt pavement utilizing less than 50,000 tons of asphalt.

West Belleview Avenue is a four-lane road that measures 68 ft. wide, which includes four 12-ft. lanes and two 20-ft. turn sections in the middle. Martin Marietta began work in May 2019 and completed the job in eight working days.

Chaulk says milling was done first over four days. Crews lowered all manholes and water valves and a subcontractor set up traffic control. They worked on the outside lane first, diverting traffic into the middle, then reversed and milled the inside lane while traffic was diverted to the outside.

Martin Marietta hired a subcontractor to handle traffic control for them and there as many as 10 people controlling traffic through the work zone. “It got extremely busy out there with traffic running by the work zone,” he says. “There was quite a bit of activity all the time.”

Chaulk says arrow boards were set on both ends of the work zone and the subcontractor coned off the work area running a cone line the full length of the street to separate the traffic from the work zone. Flaggers were used behind and in front of the mill and were also positioned strategically throughout the job to help with cross streets and to keep drivers from getting too close behind the mill.

Crews used a 12-ft. Wirtgen milling machine throughout the job because the Lakewood contract contained a smoothness specification. “We carried that same thought process through onto the Denver side even though Denver didn’t have that spec,” Chaulk says.

“The 12-ft. mill is 5 ft. larger than a standard 7-ft. mill and that 7-ft. mill puts you right in the middle of the travel lane,” he says. “On the second pass with a 7-ft. mill you usually end up leaving a small ridge that you don’t notice when you’re driving but that does affect the smoothness. A 12-ft. mill typically pushes that ridge to within a few inches of where the striping will be, depending on the lane width, so it doesn’t impact the profilograph.”

Martin Marietta used one mill supported by a seven-person crew and between eight and 12 trucks hauling the millings away. “One person operated the mill, one person on the ground was responsible for guiding the trucks, getting them in place and backing them to the mill,” Chaulk says. “We had one person in the rear keeping an eye on milling depth and alerting the operator to anything in the pavement he might need to be aware of, a skid steer operator picking up extra debris, a broom operator and one laborer.”

When milling was complete, the milled section was swept, and the traffic control subcontractor applied temporary markings replicating the original striping before the road was reopened to traffic.

Chaulk says that standard stone matrix asphalt (SMA) was specified in both bids. Lakewood also wanted to be environmentally conscious and wanted to be able to market the paving job as a green product by lowering the energy consumption in production of the mix.

“Lakewood was interested in trying it to see what the benefits of warm mix asphalt were and what the challenges were, so they spec’d it for their half of the road,” Chaulk says.

So when producing the mix, Martin Marietta added ZycoTherm, which Chaulk says lowered the production temperature of the mix from the typical 350°F to 275°F when placed. That also appealed to Lakewood because WMA enables the road to be opened to traffic sooner.

“ZycoTherm increases the workability life of the asphalt and basically enables you to pave in colder weather,” Chaulk says. “We’ve used it before, but this was the first time we used it with SMA. We’ve also never used it with that much tonnage.”

Chaulk says the 12-person paving crew used a 10-ft. CAT paver and three steel drum rollers operating in vibratory mode. He says the work was straightforward, completed much like any paving job. Because the milled pavement had been open to traffic, it was swept again before tack drivers sprayed asphalt emulsion onto the area to be paved for the day.

He says the WMA/SMA mix acted just like a normal mix, for the most part. “For the first couple of truckloads it was a little tough to get through the machine because it was real sticky product, but once we got it worked through the machine it was pretty similar to a standard SMA mix,” Chaulk says.

Chaulk says the only change they made in the paving process was adding an extra roller. “We added an extra roller to work out the roller lines farther back behind the paver and we could do that because the mix was cooling slower because it was WMA,” he says.