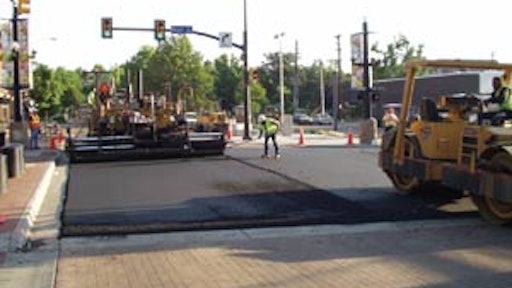 A “mill and fill” repaving project is generally a straightforward asphalt rehabilitation approach to correct surface flaws in an old road and extend its life cycle serviceability for another 15 years or so. And in the wide-open spaces of a rural environment, there are not a lot of logistical challenges in executing the approach, but a busy urban environment is a whole different story.

Lafarge West Inc. recently completed just such a project for the City of Boulder, CO, and Project Manager Scott Young will be the first to tell you that the success of this $800,000 rehabilitation required a well-planned coordinated effort on the part of all involved.

The roadways are within a designated historic district, as well as a business improvement district. Lining all of the streets is a continuous strip of various commercial business operations, including hotels, restaurants, night clubs, various retail/service establishments, office buildings, churches, civic buildings, parking garages, post office and other businesses. The area is a primary revenue generating district within the City of Boulder. The heavy concentration of businesses required a well planned construction and public relations effort.

The Loop was last resurfaced in 1989. Maintenance activities since then have consisted of patching and some limited crack sealing. The Loop resurfacing was identified as one of the Boulder’s planned 2005 resurfacing projects. The scope of the project consisted of two primary construction phases:

In project planning meetings, Boulder city officials and primary contractor Lafarge met with downtown business representatives to review the scope of the project and discuss ways to minimize construction impacts to the area. Key issues identified:

Knowing that the majority of the work would have to be done at night, Lafarge spent a week studying existing conditions in order to create an efficient patching, milling and paving plan. The street widths and striping configurations varied, which required some creativity on the contractor’s part. Instead of looking at the streets as wide-open paving, Lafarge concluded that breaking the project into distinct segments would reduce transverse joints, mitigate traffic impacts, and minimize the measures needed to protect the existing concrete roadways and walkways from wheel tracking of tack coat.

Careful planning of the new striping layouts was required and offsets were painted on the curbs to help with the placement of the longitudinal joints. When paving began, streets were carefully cleaned and string lines were put into place for the longitudinal joints for the paver to follow. Rolling patterns were quickly established with the participation by Lafarge’s quality control and materials testing personnel. Once the milling and paving commenced, the roadway surface, curbs and sidewalks were cleaned and rubble removed continuously. This was important for project visibility in the downtown area.

Since the Loop was Boulder’s highest priority in its 2005 resurfacing program, Lafarge had to implement an aggressive schedule to complete the milling and paving work during its limited project window. With all concrete work completed earlier by subcontractor Keene Concrete, Lafarge’s plan of attack included:

Pre-lowering all utility manholes and water valves to accelerate and minimize potential problems during the milling operation.

The resurfacing phases of the project were completed as follows:


While resurfacing projects are fairly basic in the technical nature of the work, the Loop project posed its own set of unique challenges due largely to the urban environment, which required minimal disruption to the business commerce. Profilograph smoothness specifications were not required, due to the 25 mph speed limit and urban nature of the project; however special attention was paid to smoothness during the paving operations. Several complicating factors which had to be dealt with in completing this project, included:

“The project really came together well, and the actual milling and paving portion only lasted two weeks,” Young says. “Working at night allowed us to complete the project quicker, and that meant fewer disruptions to the businesses in the area.”

CAPA supports project success The success of the Boulder Pearl Street Mall Loop is indicative of the Colorado Asphalt Pavement Association’s efforts to support members in their efforts to achieve project success. Safety, quality, cooperation and productivity were identified by CAPA as key factors that lead to project success. Through a series of articles and presentations, CAPA has promoted the “project success” initiative among members, encouraging them to partner with project stakeholders, including owner/agencies, subcontractors, and affected surrounding communities, toward the common goal of project success, according to Steven Peterson, president, CAPA Board of Directors.

In the 2005 fall issue of CAPA’s newsletter, The High Road, Peterson notes, “The challenge before us is to make every job a success — a quality final product built in a safe, productive manner with a high degree of cooperation between all involved.”