Materials prices have tended to sag, including in categories impacted by tariffs 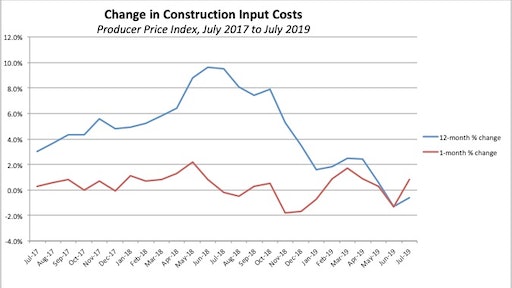 Construction input costs increased for the month of July but remain below year-ago levels.
Associated Builders and Contractors

Construction input prices expanded 0.8% in July but are down 0.6% year-over-year, according to an Associated Builders and Contractors (ABC) analysis of the U.S. Bureau of Labor Statistics’ Producer Price Index data. Nonresidential construction input prices also increased 0.8% for the month but have declined 0.3% on a year-ago basis.

“The decline in construction input prices over the past year represents one of the year’s great economic surprises,” said ABC Chief Economist Anirban Basu. “In 2017, when the global economy was immersed in a synchronized expansion, conventional wisdom held that materials prices would drift higher, including energy prices. Then simmering trade disputes offered at least the potential to further accelerate materials price increases, slimming construction firm profit margins at a time when many companies were already reporting rapidly rising worker compensation costs. 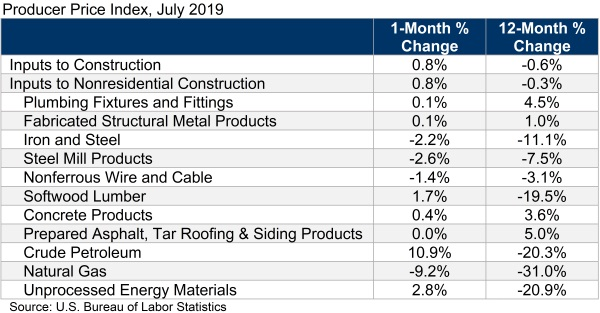 “While skilled and semi-skilled construction workers remain scarce, materials prices have tended to sag, including in categories impacted by tariffs,” said Basu. “The result is that many contractors who had built significant materials price contingencies into their agreements with purchasers of construction services are experiencing lower than anticipated materials costs. All things being equal, that would tend to shift profit margins higher.

“While crude petroleum prices rose in July, in part because of growing tensions between Iran and several Western nations, oil prices declined meaningfully in early August,” said Basu. “Natural gas prices continue to downshift and are down 31% over the past year. There are many reasons for this, including dramatic productivity improvements in the U.S. energy industry and a consistently weakening global economy. In general, those segments associated with price increases include raw materials with a significant amount of processing and value added. For instance, the category that includes prepared asphalt is associated with a 5% increase over the past year, while the price of plumbing fixtures and fittings is up 4.5%. Absent major, unanticipated geopolitical conflagration, materials prices seem poised to continue to drift lower as the pace of global growth subsides.”