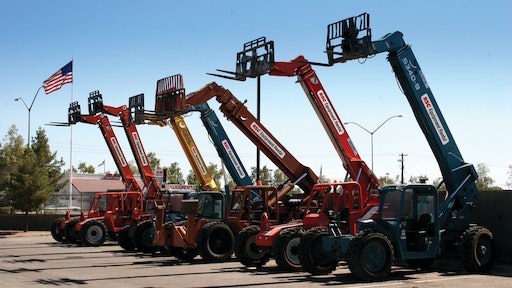 I think it’s safe to say the equipment rental industry has finally recovered. Fourth-quarter financials were very strong for the major publicly funded companies and their managements have all predicted the trend will continue during 2012.

Fleet utilization rates were up almost across the board, with the exception of Essex, which rents heavy lift cranes, a late-cycle product used toward the end of projects. Furthermore, they're very specialized and used mostly for the very largest projects.

Utilization, rates and CapEx going up

When fleet utilization goes up, it provides a tremendous incentive for rental companies to add fleet. If they don't, they’ll lose business. An examination of 2011 fleet purchases for the majors indeed shows a positive trend as well, up more than 100% after a major investment slowdown in 2009 and 2010.

Those expenditures have not resulted in a significant reduction in average fleet age, despite rental companies’ significant fleet investments. To me, that’s an indication companies are holding onto their older machines because of the upturn in utilization. We can expect to see higher repair and maintenance costs during the next few quarters until rental companies make a commitment to continue with their massive re-fleet effort.

Probably the best news for the industry is that rental rates are on the increase after many years of huge declines resulting from a tough competitive environment and widespread price cutting.

A new wave of consolidation?

Attendance at The Rental Show in New Orleans was up 20% according to the American Rental Association. All of the manufacturers I spoke with said the show was the best since 2007, sales wise. To illustrate the point, Sunbelt Rentals held its annual branch manager meeting in conjunction with the show. At the end of their meeting each day the managers, all wearing Sunbelt shirts, inundated the show. It looked like a sea of green and yellow.

The show was abuzz with speculation about whether the industry will go through another round of consolidation. The question of the day was if the United Rentals/RSC merger is the first of many more to come. If so, who are likely to be targets? Hertz has been for sale a number of times in the past, although there are no current rumors about them that I've heard. NES, Neff and now bankrupt Ahern are on everyone’s list as consolidation candidates.

Will a surge of national consolidations spark an increase in mom-and-pop and regional rentals along the lines we saw in the early 2000s? One element that spurred the consolidation movement during that era was the high multiples Wall Street was putting on the consolidations. The high multiples gave them access to lots of acquisition capital as well as the ability to use their stock as acquisition currency. We're beginning to see the stock prices of the nationals get into a range that makes it as easy for them to make acquisitions as it was in the early 2000s. In other words, keep your ears and eyes to the ground -- we might be entering another consolidation period.

See the Energy at The Rental Show 2012