Used construction equipment values can be an efficient guide to determine how much to pay for a new machine. 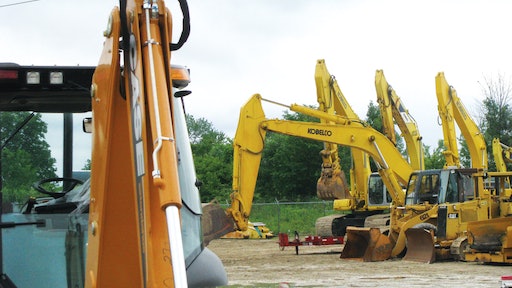 Do your homework on used equipment values before investing in a new machine purchase.

Actual selling prices of equipment are difficult to measure. Having those prices would give buyers a big advantage when negotiating to buy new equipment.

New equipment “street prices,” which are the actual transaction prices paid, are almost impossible to track because you have to take into account the MSRP (manufacturer’s suggested retail price), the value of trade-ins, special incentive discounts, special finance arrangements such as low-interest or zero-interest loans, extended warranties that are included or purchased separately, any preventive maintenance contracts included, etc. And that’s just for starters.

After a deal is signed, equipment buyers often don’t know if they got a good deal or not. It would make the average buyer's head spin. You would have to be able to strip away all the extras to find out -- if you could find out what the extras are. To obtain that information, you would have to ask the equipment buyer exactly what they paid for that new machine and what extras came with it, a question I have found most buyers will not answer. The automobile market has similar issues, but at least there are companies out there such as Consumer Reports where a buyer can obtain invoice pricing of cars, trucks and accessories.

It’s much easier and more convenient for an equipment buyer to obtain used equipment prices. Those prices can provide buyers of new equipment with a benchmark for what they should pay for a new machine.

There are numerous used equipment value guides out there, as well as publications advertising used equipment where you can find asking prices. Some value guides also publish auction values or have them available on their websites. Auctions, depending on the type, provide us with good values to use for planning purposes. Banks and finance companies often use auction prices to set residual values (the final payment amount) for loans and leases.

There are various kinds of auctions. Two of the most common are reserved auctions, where the machine owner sets a minimum bid, and unreserved auctions, where the price paid is determined by the bidders. Auctions used to be notorious for underhanded bidding practices, but in the past 20 years, they have proven to be a very legitimate channel for equipment owners to dispose of surplus fleet. In my opinion, auction values today are a very reliable indicator of the true value of any particular machine.

Let Auction Values Be Your Guide

So how can you use auction values to determine if you're getting a fair deal on new equipment? As I said before, it’s often impossible for a buyer to determine the actual price paid for a machine because of fluctuating values for trade-ins, interest rate deals, extended warranty packages, etc. But if you do a quick review of used equipment values for the same or a similar machine that is one or two years old, you can get a feel for whether the deal you’ve signed is fair.

For example, if you pay $50,000 for a machine; had a trade-in that was supposed to be worth $10,000; and the deal included zero-interest financing and a three-year extended warranty thrown in, did you get a good deal? I would estimate that the total value of the deal should approach $65,000. If the used values for a similar two-year old machine are $30,000, there is a good chance that your machine will be worth about the same amount in two years, or 40% or less of the price you paid.

In my experience, a used machine in good condition should be worth 20% to 30% after five years. So if it's only worth 40% after two years, you probably overpaid. Another reason for low used values could be that the brand is new to the market and a pricing pattern has not developed.

The graph shown is a plot of used values as a percent of their replacement cost. Data similar to this can be used to verify equipment values. This graph is interesting because it illustrates that since the middle of 2009, used equipment values have risen and in some cases have more than doubled. The higher used equipment value trend is caused by the economic recovery in the U.S., which has been slow but steady. It has also been caused by users wanting to purchase low-hour used machines that are equipped with Tier 3 engines – the older emission regulation engines.

A lot of the equipment purchased, especially by individuals and small buyers, is an emotional purchase. The buyer selects a machine, model and brand because he’s loyal to the brand, the dealer or to the dealer salesman. I suggest that it will pay off in the long run if you do some homework and a thorough analysis of what’s out there before plunking down those large sums of money for a new machine.

Frank Manfredi, president of Manfredi & Associates Inc., has been a consultant to the heavy-equipment industry for more than 35 years, during most of which he has published a monthly newsletter, Machinery Outlook, which is seen as a critical source of information about the construction, mining, agricultural and material-handling machinery markets.

Attendees will have a chance to take an in-depth look at the company’s leading engineering practices and interact with senior staff at the event at Booth #N2468
Tsurumi America Inc.
June 3, 2021
Follow Us