How Tier 4 Final Will Affect Your Rental Business

There’s an operational cost component in the switchover to Tier 4 engines that’s not too easy to anticipate. It’s anyone’s guess what those engines will cost to operate. 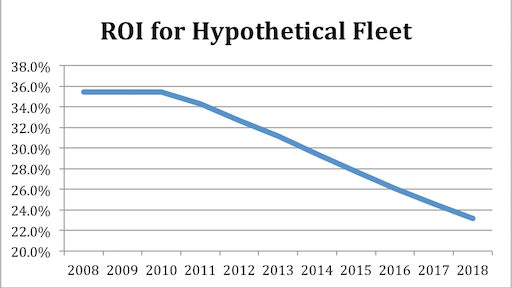 Lately I’ve been thinking a lot about the impact Tier 4 interim and Tier 4 Final engines will have on the rental industry, not only operationally but also from an investment point of view. How will decisions about the composition of rental fleets be affected? Operating a rental company gets down to deciding which machine, or combination of machines, is more profitable. The only thing we know for certain about the new engines that are beginning to show up in the marketplace is that they're more expensive to purchase, and also more expensive to operate.

There’s an operational cost component in the switchover to Tier 4 engines that’s not too easy to anticipate. It’s anyone’s guess what those engines will cost to operate. It will take some time to build operational experience with the engines. Most of the manufacturers are saying operation costs are equal to or better than the machines they are replacing. Maybe the fuel economy is about the same, or slightly better, but in my estimation operating them will cost more, just for filters and other engine maintenance as well as for the ultra Low Sulphur Diesel (uLSD) fuel needed to operate them.

For example, most of the engines use common-rail fuel injector systems set at very high pressures – north of 25,000 psi. To achieve those pressures, the injector nozzles require 2-micron fuel filters. I’m expecting to hear that fuel filters have to be changed out much more frequently than in the past, and that the filters themselves are more expensive. To put the 2-microns in perspective, remember the average human hair is 50 microns. Preventing fuel contamination on jobsites will be a major problem.

Effects on performance and price

Most manufacturers are saying their machines will perform as well as or better than the Tier 3-equipped models. I not so sure about whether that is true about all brands and models. Rick Clauss, president of Management Service Partners, told me, “I understand the decline in digging performance [of backhoe-loaders] is noticeable with the interim and final Tier 4 engines.”

There is an investment component to the switchover that’s easier to anticipate. I recently looked at the MSRP prices for backhoe-loaders that dig 14 to 15 feet. The MSRP for those babies, with bare-bones accessories and Tier 4 interim engines, is more than $100,000.  That price is about 12% higher than a similar Tier 3 model. I am anticipating that Tier 4 Final engines will add another 12% or so to the price. It wasn’t that long ago that a backhoe of this size cost $65,000.

I put together a hypothetical investment model for a rental operation that has a fleet comprised of 100 backhoe-loaders. I estimated the return on investment (ROI) starting in 2008. Initially, I assumed the whole fleet would consist of machines with Tier 3 engines and the average price for them was about $55,000 – a total investment of about $5.5 million. I also assumed the rental company owner would operate those machines for three years and then in 2012 would begin replacing them with machines equipped with Tier 4 interim and eventually Tier 4 Final engines. Approximately 10% of the fleet would be replaced every year and that by 2015 the fleet would be 50:50, half with Tier 3 engines and half equipped with Tier 4 interim and higher machines.

It should be noted that rental companies operating in or near urban areas the EPA has designated as “non-attainment zones,” or places where air pollution levels are unacceptable, might have to provide customers with Tier 4 or higher machines. There’s no choice. The use of Tier 4 engines is often mandated on certain jobs paid for by state governments and is almost always required on federally funded jobs. In those situations, it will not be possible to operate a blended fleet – that is, a mix of Tier 3- and Tier 4-equipped machines.

Back to my model... I assumed a monthly rental rate of $2,500 for a 14-foot backhoe and a time utilization of 65%. Some people would say that 65% time utilization is too high, but I wanted the model to portray what I consider to be the best possible return. Using those assumptions I projected the ROI for a fleet of 100 backhoe-loaders. The ROI by year is illustrated in the following graph.

The graph portrays a declining rate of return as the higher-priced Tier 4 machines are blended into the fleet. I assumed the monthly rental rate would remain the same throughout the period due to competitive pressures from other rental companies. The graph is clearly a justification for rental companies to increase rental rates for the higher-priced machines. It is also a justification for rental companies to extend, as long as possible, the life of Tier 3-equipped machines. I have not included repair and maintenance expenses in this analysis. Obviously, an older fleet will have higher expenses. I’d also like to point out that rental companies that emphasize weekly and daily rentals instead of monthly rentals could boost their ROI by one and a half to two times the levels shown here.

Rental fleet owners may find it more economic to change the mix of their fleet and instead of purchasing a $100,000 backhoe-loader, invest in skid-steer loaders in combination with compact excavators. A skid-steer loader purchased for $35,000 and a compact excavator for $65,000 results in the same $100,000 investment but the rental business will be able to rent two machines instead of one for a higher return. Another advantage of purchasing two smaller machines is that many with less than 75 hp don’t require engines equipped with expensive aftertreatment devices which impacts the upfront purchase price, repair and maintenance expenses and resale value.

There is also some uncertainty surrounding the value of used Tier 4-equipped machines. The used (residual) value will be hard to predict until the machines hit the used marketplace. Approximately one third of the used machines sold by the national rental companies are sold at auctions. Of that amount, a significant portion are exported to places such as Latin America and Africa. Readers should keep in mind that Tier 4 machines require uLSD fuel, which is only available in developed markets such as the U.S., Canada, Europe and Japan. Tier 4-equipped machines exported to other markets will have to be modified so they can burn higher sulphur fuels. Modifying or disabling the emission devices on the machines will result in an additional expense for machines that are already higher priced than Tier 3-equipped machines. Manufacturers might have to guarantee residual values to reduce the uncertainty for their rental business customers. Manufacturers that are using Tier 4 engines that don’t require special devices to meet the regulations will have a distinct price advantage. So far, JCB has said their engines do not require special emission devices and Bobcat has said some of its models are equipped with engines that don’t require special devices.

A boon to rental?

The higher machine price issue also could cause a change in behavior of equipment owners that I’m not sure has been accounted for by anyone. Owners faced with spending more money for a backhoe-loader than they are used to might decide that in the long run, it's cheaper to rent a machine than own it. Equipment owners’ decisions in favor of renting machines might be tipped by questionable operating costs and uncertainty over the value of used machines equipped with Tier 4 engines. If this trend occurs, it could be a boon to rental companies and will make it easier for them to increase their rental rates.

I’ve been also thinking about the impact of higher machine prices on equipment manufacturers. My conclusion is there will be fewer machines sold annually than in the past and that a large percentage of those sold will be go into rental fleets. In 2012, the percentage sold into rental fleets in the U.S. was 52% of all new machines. I’m expecting that percentage to reach 60% or more by 2014. If rental companies become the major source for machines, I believe they will prefer machines that have multiple functions that can be rented to a broader segment of their customer base. Availability of a wide range of attachments for those machines will become very important. In fact, I speculate that renting attachments will become a niche rental market.

The Impact of U.S. Emission Regulations on the AWP Market