The Impact of U.S. Emission Regulations on the AWP Market

The rise in operating expenses is not trivial, but the full impact of the regulations probably will not be felt until 2015 at the earliest 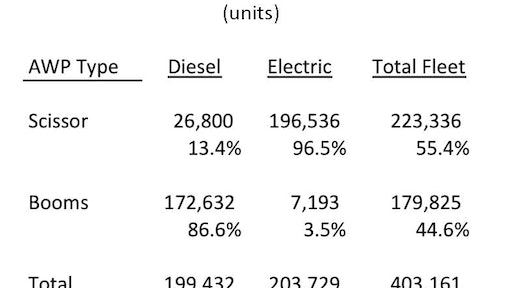 On January 1, 2014, the U.S. Environmental Protection Agency (EPA) implemented Tier 4 regulations, the final phase in a series of measures to limit toxic emissions from diesel powered off-road equipment. Most categories of products are affected, including aerial work platforms (AWPs).

The devices added to diesel engines are expensive. Most diesel-powered machine prices are up 15% to 25%, depending on the brand of engine. AWPs are a unique product category in that a fairly substantial portion of the machines, especially the smaller ones, are equipped with electric drives – batteries that power electric motors.

Therefore, the new EPA emission regulations will have an impact on about half of the AWP market. The standards and implementation dates are illustrated in the table that follows.

How big is the impact?

So, how much do the EPA regulations affect companies that rent AWPs? I estimate that approximately 10% of the AWPs in the current fleet are equipped with Tier 4 engines. Therefore, the impact on the operating expenses of rental companies is not trivial, but on the other hand, the full effect of the regulations has not been felt yet and probably will not be fully realized until 2015 at the earliest. Moreover, the quantity of AWPs that are equipped with engines rated at 75 horsepower or more is very small, probably less than 5% of the total AWP population. As can be see from the table, engines under 75 horsepower have far simpler emission requirements. The smaller engines do not have limits on hydrocarbon and nitrous oxide emissions that are the more difficult exhaust gases to mitigate. It is interesting to note that many of the new models of diesel-powered AWPs introduced by manufacturers in the past two years are rated below 75 hp and there have been a number of instances where engines have been derated in order to slip under the 75-horsepower threshold.

According to Rouse Analytics, which tracks the age of equipment in rental fleets, the average age of AWPs in the nation's rental fleets is between 52 and 57 months, which means that rental fleet operators will not be purchasing large quantities of AWPs with new diesel engines for several years.

In order to meet the emission requirements, engine manufacturers have had to increase the operating temperature of the engines to assure more complete combustion. In addition, they are using very high injector pressures (up to 30,000 psi) which creates its own problems. The injectors wear out faster than they did before the regulations went into effect. In addition, with those high pressures a pinhole break in a fuel line or hose could cause serious injury if the service technician is sprayed with fuel. The special injectors and high pressures also require the diesel fuel to be very clean. Fuel filters are down to 2 microns. If fuel contamination is a problem on a jobsite, filters must be changed out frequently.

In order to reduce the amount of nitrous oxide emissions most diesel engine manufacturers add urea to the air intake. There is a separate tank for the urea and it comes in several forms but is most commonly referred to as diesel exhaust fluid (DEF), or DEF Blue. The urea combines with the diesel exhaust gases, neutralizes them and reduces the amount of oxides, thus making the exhaust emissions acceptable. The urea is injected automatically along with the fuel.

When Tier 4 engines become ubiquitous, there is the issue of what will happen to the value of those machines. I estimate that in the past, 10% to 20% of used AWPs were sold to customers in overseas markets, especially in Central and South America. Those regions of the world do not have the ultra low sulfur diesel (ULSD) fuel Tier 4 engines require. Therefore, the only way Tier 4-equipped machines could be sold in those regions is to remove the emission reduction devices, a process that will add more expense to machines that are already more expensive than the machines they replaced. As a result, I have predicted that trend will cause a decline of between 10% to 20% in used equipment values.

Are You Ready for Tier 4?

How Tier 4 Final Will Affect Your Rental Business

With a 3.5-ton lifting capacity, and a vertical reach of 56 feet, the electric SPX532 brings versatility to any indoor or outdoor project.
April 16, 2021
Follow Us