The equipment rental industry has enjoyed strong growth over the past few years, particularly in the aerial sector. The outlook for the next few years is equally optimistic, but what are the key drivers and where should businesses focus their attention? 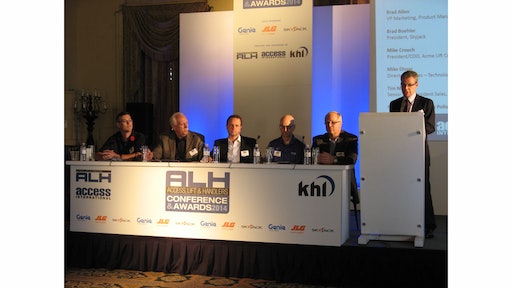 The equipment rental industry has enjoyed strong growth over the past few years, particularly in the aerial sector. The outlook for the next few years is equally optimistic, but what are the key drivers and where should businesses focus their attention going forward? These topics and others were the subject of a panel discussion during the Access Lift & Handlers Conference & Awards held in Miami, Nov. 11, 2014. Industry leaders touched on the future of the oil and gas sector, as well as government investment in infrastructure and the effects these will have on the rental market. An excerpt from the discussion follows.

Murray Pollok, managing editor, International Rental News: What are your current feelings about the rental market and its prospects for next year, in particular, with regard to the oil and gas sector?

Mike Disser, director of sales - technology & national accounts, NES Rentals: The prospects for the rental market are very strong. I'm very optimistic looking at the next four years. We're looking at probably 9-percent annual growth for the rental industry for the next few years. That's a pretty strong proposition for us. The different sectors of the business that we track most closely, namely construction spending, look very strong. I can't say we've quite seen any softening yet in the oil and gas sector, but you can hypothesize why that might happen when oil is in the [$50] a barrel range. I'm not sure that concerns me much because the price will rise again over the long term. Either way, the U.S. is going to be an energy super power.

Mike Crouch, president/COO, Acme Lift Co.: At Acme, we specialize in the larger booms and larger telehandlers, and we're very strong in the oil and gas sector and really, anything to do with energy has been very strong for us. We continue to see that actually growing even through the next downturn. There are lots of other areas we would like to see improve, such as infrastructure, but eventually we're going to get to a point where we've got to do something there. I think that's going to be another really strong point for us in the future.

Pollok: Equipment is playing a big role in the energy sector. What types of equipment will there be a growing need for?

Crouch: Big booms and big telehandlers are important in wind energy and oil; that's getting to be very big for us.

Pollok: How do the manufacturers view that trend?

Brad Boehler, president, Skyjack: From our perspective, what we see in the marketplace and what we see in our customers is continued optimism into 2015. In the North American marketplace most are saying they're expecting next year to be similar to this year, if not somewhat better. The oil and gas market has certainly driven a lot of our business during the last few years and I haven't seen any signs of that declining. Here in North America, people are optimistic they'll grow a little bit next year and globally, we've got other markets that are going to grow as well next year.

Tim Morris, senior vice president sales, market development, JLG Industries: With regard to U.S. exports of energy, that ship's set sail. It's going to be very difficult to derail now, regardless of the price of a barrel of oil. We've heard about the price sensitivity of a barrel of oil but the response from the oil and gas industry has been look, we're setting sail with exploration, refinement, distribution... it's a cruise ship. We're not going to stop this thing any time soon.

Brad Allen, vice president marketing, product management and engineering, Terex AWP: We've seen three really good years and obviously that was because rental companies basically defleeted pretty heavily and then bought very, very impressively. In that time, all manufacturers increased capacity. And now we're seeing what some refer to as a flattening, but I think that's partly because what we've seen in the last 10 or 12 years has been either wild growth or wild drop off. What we're seeing now is in a more normal range. The challenge that we've seen in our teams is people who only have so many years in rental have not seen true seasonality and what it looks like throughout the year. What it looks like now is becoming what we used to call a typical year. At some point, we expect within the next four or five years, there'll be a drop off, but it will be hard for some to tell that from the drop off that occurs seasonally each year.

Pollok: Manufacturers seem optimistic about sales for next year. Should they be?

Disser: Yes, I'd say we're at the same level we've been at for the last four years.

Crouch: I think for us, we're going to see a redirection of CAPEX, especially into the larger booms and telehandlers. The jobs are certainly there but they're expensive jobs. We'll definitely be spending more.

Pollok: Everybody talks about the oil and gas sector flattening. Are there other sectors of the economy where you see growth opportunities?

Disser: Non-residential construction is certainly the main driver; vacancies are trending down so construction of office space is starting to come back around, and commercial spending is picking up. But as things get stronger in one segment, another has weakened. We’re seeing a little bit of that where education and healthcare have slowed down and that has to do with a reduction in public funding. But, all in all, it’s a pretty compelling spend for us going forward.

Boehler: I'm not sure I can point to any specific sectors and say they're changing rapidly one way or the other, but there are a lot of very large projects out on the horizon and those are the types of things that are going to drive that growth here and globally.

Pollok: With regard to government spending on infrastructure in North America. Do any of you want to say what the government should be doing?

Crouch: We were in Montreal last month and they have 200 bridges that are going to need serious repair. That's just one city. In New York City we saw a lot of big booms working on the faces of buildings. There's not only government spending on infrastructure to consider, there's just an awful lot of work out there that needs to be done.

Disser: Infrastructure requires an act of congress to get spending authorization, and they've just been continually kicking the can down the road for the 15 years I've been in this business. It's going to take the next big bridge to fail in order to get something done. Unfortunately, something like that is going to be the catalyst.

Allen: We've had a lot of bridges fail and unfortunately they don't end up being the catalyst. We had a bridge on I-5 collapse this past spring and cars were in the water. Everyone talks about infrastructure and what it's going to take to see a change. The truth of the matter is that infrastructure was put in extraordinarily quickly and inexpensively, and fixing it has to be done more safely. Today it has to be done right, but the amount of money is so astronomical that no budget in the world is even going to get close to what needs to be done.

Morris: I would agree. We need to make a commitment on a national level, but I don't think we're going to see that any time soon because the problem is just too hard. There are too many other critical issues facing the nation right now.

Felling Trailers' goal is to bring awareness to various nonprofits that are making a difference by donating 100% of the winning bid from the auction to a different nonprofit each year.
Felling Trailers, Inc.
April 7, 2021
Follow Us