Don’t wait until the last minute to speak up if you will be impacted and required to address any change. This notification is to make you aware of potential changes that may impact you and your business. 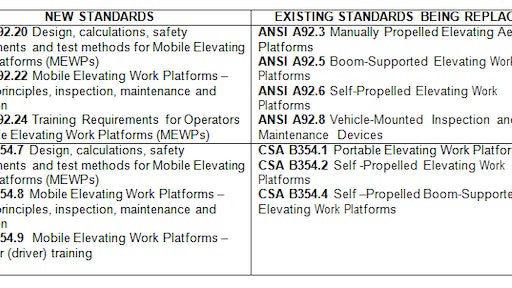 Many standards are in the process of being updated and some will be in the public comment period in the near future. This is the time to allow your voice to be heard. Ultimately, however, equipment users and the companies that rent to them should expect many significant changes when these new standards are published. Don’t wait until the last minute to speak up if you will be impacted and required to address any change. This notification is to make you aware of potential changes that may impact you and your business.

It is most common to see periodic maintenance apply to standards. With a review every five years to extend no further than 10 years, committees made up of individual industry experts who volunteer to complete the process, invest their time to create improved standards. The time required to conduct a thorough review of a standard varies based on many factors, such as the length and complexity of the standard being reviewed, the need for change in current standards, the level of harmony on proposed changes, and the availability of members to meet.

In the US, the Scaffold and Access Industry Association (SAIA) is an ANSI-accredited standard developer that is the secretariat for the ANSI A92 series of standards that address aerial lift and mast climbing work platform (MCWP) standards. In Canada, the Canadian Standards Association (CSA) is accredited by the Standards Council of Canada (SCC) to carry out standards development and certification functions.

The intention to standardize to this international standard language where possible will undoubtedly result in changes that will impact all AWP industry stakeholders, from manufacturers to users.

It is anticipated that during the summer of 2015, the final drafts of the new suite of standards will be released for public comment. From that date, you can expect the standards to be published in about 10 months (estimate April –June 2016).

In the long term, it is hoped that all other product-specific aerial lift standards are consolidated into these new standards, such as vehicle mounted (ANSI A92.2 and CSA C225) and any other specialized AWPs (i.e. ANSI A92.7 Airline Ground Support Vehicle-Mounted Vertical Lift Devices).

ANSI A92.2 Vehicle-Mounted Elevating and Rotating Aerial Devices will not be included in the new standards and has recently completed its periodic review. You can anticipate a new 2015 standard being published this year. The Canadian CSA-C225 Vehicle-Mounted Aerial Devices will also go through a periodic review and be re-issued. It is hoped that both ANSI A92.2 and CSA C225 will become part of the new suite of standards in the future.

ANSI A92.7 Airline Ground Support Vehicle-Mounted Vertical Lift Devices was published during 2014. This was a dormant standard and was revitalized to address this product group. It is hoped that this standard will also join the suite of standards when its next periodic review occurs.

Both ANSI A92 and CSA B354 standards cover MCWPs and transport platforms. The ANSI A92.10 Transport Platform standard was reaffirmed (no change) in December 2014 from the previous 2009 publication. The A92.9-2011 Mast Climbing Work Platform standard is due for a review in 2016. CSA B354.5 (R-2011) is under periodic review and will be formatted to follow the ISO standard structure with a design, safe use and training standard. CSA B354 will also issue a set of transport platform standards following this structure. You can expect to see these out for public comment in 2015 with anticipated publication during 2016.